The factory in a box could be located in front of a hospital, next to a shopping center, or near a school. The integrated air-conditioning system with air purification filters makes production possible even in places with high risk of viral contamination.

The demonstration will show how design is optimized by leveraging custom graphics and 3D simulation, then converting patterns into a marker file that will be prepared and sent to a digital printer.

Magic 2018 Preview: Moving Into The Future Of Fashion Production And Reimagining Retail 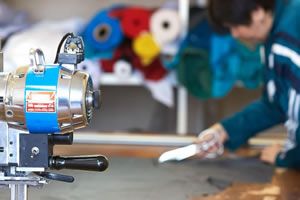 Deborah Weinswig for Forbes: One overall theme of next weeks Magic event is moving into the future in terms of manufacturing fashion, reimagining retail and, ultimately, creating and adopting solutions to achieve speed. 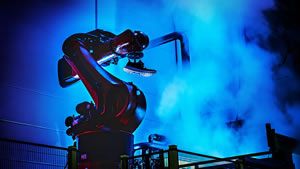 Greg Nichols for ZDNet: It's an early step in a bold experiment by a global retailer to use time-saving robots to design small-batch collections, a departure from the mass production methods employed by global shoe and apparel brands. 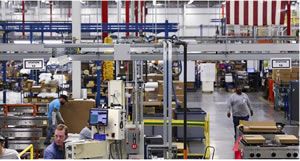 Tim Sandle for Digital Journal: The micro-factory concept is based on robotics and a flexible approach to manufacturing. Then key selling point is that the factory can be set-up and put to work very quickly.

Harvard Business Review: Midway through 2014, GE Appliances launched FirstBuild - a GE-equipped innovation lab and micro-factory - to augment the strengths of a long-established company with those of an entrepreneurial startup. Separation is the key.

Scott Kirsner for Boston Globe: The revolution is about three things: more advanced software for designing things; devices like 3-D printers that can quickly crank out a prototype; and robots and other technologies that will make the factory floor more efficient and flexible. Paul Ebeling for Live Trading News: "These Microfactories are a glimpse of what the future represents, combining innovation and educational ecosystems with fast, efficient and sustainable manufacturing capabilities. The possibilities are truly limitless," said HE Mohamed Abdullah Al Gergawi, UAE minister of cabinet affairs and MD of Dubai Future Foundation.

Innovation in Textiles: ¬ At the upcoming Texprocess trade fair, which will take place in Frankfurt, in May, a Digital Textile Micro Factory will present a live demonstration of an integrated production chain for apparel. In collaboration with the German Institutes for Textile and Fibre Research in Denkendorf and a number of well-known companies in the textile sector, Texprocess will demonstrate the entire networked production of items of clothing - from the design stage to digital printing, automatic cutting out and fabrication. Visitors at Texprocess will follow a signposted path through the various individual stages of manufacture in the micro factory and will be able to get information from experts at each stage. In addition, there will also be guided tours on offer. ¬ Cont'd...

Robert Channick for the Chicago Tribune:  GE is opening a microfactory in Chicago to turn big industrial ideas into small-batch prototypes.  The Chicago manufacturing facility, set to open in December, will be the first for Fuse, a new GE crowdsourcing initiative to create and build innovative industrial products. One of the first challenges on the Fuse drawing board, for example, is finding a new way to quickly inspect a hot jet engine between flights. "The idea of reaching out to the online community really accelerates how we introduce new products," said Axel Grippo, Fuse's inaugural general manager.  The microfactory will be housed inside the mHub technology incubator, and will employ a staff of about 15 to 20 once manufacturing gets up to speed, Grippo said. The first prototype is expected to roll out early next year.   Cont'd...

NewCo Shift:  Local Motors was founded in 2007 by John “Jay” Rogers, an Ivy league-educated ex-Marine who wanted to marry his lifelong interest in vehicles with new economic models. The result: Local Motors, a company that, after eight years in business, now produces a series of vehicles built locally in a handful of facilities, but designed by a global community of enthusiasts. Local Motors’ business model is built around its microfactories. The four now in existence‚Ää—‚Ääand the dozens more that the company plans to open over the next 10 years‚Ää—‚Ääeach focus on a few vehicle types. Each looks to source components locally to the greatest extent possible. And each features a modular factory floor that can be configured and reconfigured as needed to accommodate the demand for individual vehicles.   Cont'd...

Benedict for 3Ders.org: ¬ German metal 3D printing specialist Concept Laser has unveiled its new "smart factory" approach to additive manufacturing. The idea behind the Industry 4.0 "smart factory" is to decouple process stages, allowing tasks to be carried out in parallel and physically separate from one another. The¬ AM Factory of Tomorrow, Concept Lasers modular additive manufacturing factory-building kit, has been designed to allow manufacturers to seamlessly incorporate additive manufacturing technologies into existing production lines or to develop new and efficient AM production spaces. The Lichtenfels-based company has now revealed new aspects of its advanced manufacturing concept, detailing how a move from the¬ sequential¬ to the¬ parallel¬ could maximize production speed, cost-efficiency, and scalability. ¬ Cont'd... ¬

Ian Wright for Engineering.com:  Make no mistake, 3D printing is changing manufacturing. Although it may take years before we see the full impact of bringing this technology from rapid prototyping to full-scale production, there are already hints of big things to come. Take Local Motors’ recent purchase of two Big Area Additive Manufacturing (BAAM) systems from Cincinnati Incorporated (CI) as an example. The former company designs, builds and sells custom vehicles out of its US-based microfactories. The latter is a century-old manufacturer of metal fabrication tools and, more recently, BAAM.   Cont'd...

How Microfactories Can Bring Iterative Manufacturing to the Masses

ANDREW O'KEEFE and JASON DORRIER for Singularity Hub:  Humans manufacture a mind-numbing amount of stuff each year—ever wonder how we do it? In the past 100 or more years, it’s been all about economies of scale. This means you should make a lot of a thing because the more you make, the more your fixed expenses get spread out. This reduces the cost of each unit, from light bulbs to iPhones. Here’s the problem. It’s expensive to do a big manufacturing run. So, how do you know what to make in the first place? Often, it’s an educated guess based on prototypes and limited feedback, but you don’t really know until you try to sell a product—and by then, you’re fully committed, succeed or fail. Jay Rogers of Local Motors wants to upend common wisdom. Manufacturers should run through tons ofpotentially good ideas and then test them out to see if people actually want what they’re making before going full scale. And Rogers thinks microfactories are the way to do it.   Cont'd... 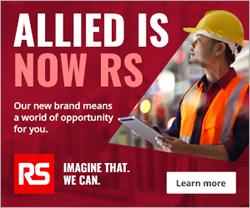 Moxa is a leader in edge connectivity, industrial computing, and network infrastructure solutions for enabling connectivity for the Industrial Internet of Things. With over 30 years of industry experience and 65 million devices connected worldwide, Moxa has a distribution and service network to serve customers in more than 80 countries. Now at Allied-find over 1,000 products from Ethernet switches, protocol converters, routers, and more. Allied Electronics & Automation, part of RS Group & Automation, part of RS Group is an authorized distributor of Moxa.
More Advanced Manufacturing and Factory Automation Products | Feature Your Product