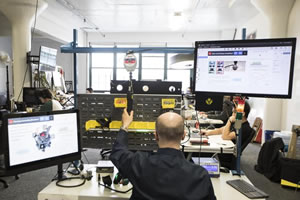 Scott Kirsner for Boston Globe:  We’re living through a moment where the technology for making stuff is making startling leaps daily — progress that in an earlier era would have stretched out over decades. If you were an armorer in medieval Europe, making a chain mail garment was a time-consuming job. Each individual ring of iron had to be forged, and then the rings were riveted together, a process that would take weeks or months, depending on how many apprentices you had.

This past Tuesday, I dropped by the Somerville offices of a startup called Formlabs and watched as a 3-D printer worked on the equivalent of a chain mail shirt — one designed by Nervous System, a nearby design firm. The printer would make 11,300 individual links out of a hard plastic material in hours.

Even in the age of 3-D printing, Nervous Systemcofounder Jessica Rosenkrantz says, “We’ve never printed the design before, or really anything quite like it.” It’s far more intricate than similar pieces her firm has shown at the Museum of Modern Art in New York or the Museum of Fine Arts in Boston.

The Digital Factory — a conference held at MIT on Monday — will highlight many of the people and companies at the vanguard of this manufacturing revolution. It’s being organized by Formlabs and another Somerville startup, Tulip Interfaces, that were both born at MIT.  Full Article: