BÉRÉNICE MAGISTRETTI for VentureBeat: Sobalvarro and his team are trying to reduce the manual labor humans shoulder in industrial work settings, leaving the heavy lifting to the robots. The DCC is a unique learning center where companies leaders and their workforces participate in hands-on, next-gen digital manufacturing workshops. This helps them advance their business operations, design and productivity, and prepare for tomorrows jobs.

MSN: Apple chief Tim Cook announced Apple is creating a fund to get more people in the US to do "advanced manufacturing," kicking it off with a billion dollars.

Desktop Metal, an emerging startup with the mission to bring metal 3D printing to all design and manufacturing teams, announced today it has raised a total of $97 million in equity funding since its founding in October 2015. The announcement comes as the result of the latest Series C investment of $45 million, led by GV (formerly Google Ventures), as well as BMW i Ventures and Lowe's Ventures. Desktop Metal will use the funding to continue to develop its technology and scale production as the company prepares for its product launch later this year.  Driven by invention, Desktop Metal is committed to accelerating the adoption of metal 3D printing in design and manufacturing through the creation of innovative technology that produces complex parts. Previous investors include NEA, Kleiner Perkins Caufield & Byers, Lux Capital, GE Ventures, Saudi Aramco, and 3D printing leader Stratasys.   Full Press Release.

Steve O'Hear for TechCrunch:  3D Hubs, an online marketplace for 3D printing services, is tapping into two recent trends enabled by industrial 3D printing: the rapid prototyping of new products, and the move to personalised and bespoke production. The Amsterdam-headquartered startup connects those requiring 3D printing with local 3D printers, both through its website that lets you order 3D printing jobs online, including getting a real-time quote, and via an API that enables companies to automate short production runs of products on-demand. The latter, of course, is also powering “zero-inventory” manufacturing: products are only produced on a per-order basis (and in some instances are also fulfilled directly to the end customer), which is another trend that is starting to gain traction.   Cont'd... 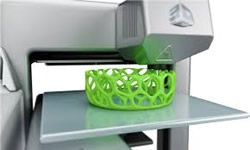 Dana Blankenhorn for SeekingAlpha:  While many people consider 3D printing dead, given what has happened to the stocks of industry leaders such as 3D Systems, Stratasys, ExOne and voxeljet , it's more accurate to say the industry has rebooted and is preparing for another run. This means the industry's excitement is now coming from college campuses and startups. As an investor you want to keep an eye on this, but withhold your investment. Industry leader 3D Systems has been drawing a bid this year as it  undergoes a restructuring, bringing in more professional management, anddropping the Cube, its consumer printer, from the product line. For all of 2015 it reported a loss of $664 million, $5.85/share, on revenues of $666 million. The stock, which once traded as high as $96/share during the last boom, is now at around $13, but it had been as low as $6.42 in mid-January. Founder Charles Hull, 76, has been kicked upstairs to a Chief Technology Officer role.   Cont'd...