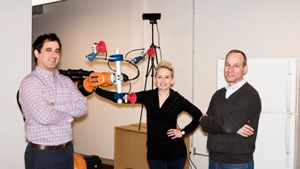 BÉRÉNICE MAGISTRETTI for VentureBeat:  Veo Robotics, which is building a smarter, more intuitive robotics system for industrial applications, announced today that it has secured $12 million in funding. Lux Capital and GV co-led this round, with participation from existing investor Next 47 — a venture firm created by Siemens.

Founded in 2016, the Cambridge, Massachusetts-based startup provides AI-powered software that tells machines how to act and respond to humans in a manual labor setting. The system is paired with hardware, which includes a GPU compute engine and distributed 3D sensors.

“Our system builds a unified, semantic representation of what is happening in the workcell — where the robots are, where the people are, where the workpieces are,” wrote Veo Robotics cofounder and CEO Patrick Sobalvarro, in an email to VentureBeat. “It then projects into the future where those elements could move in the next 100 milliseconds and uses intelligent controls to override the robot programming and make it responsive to the human worker’s presence.”  Full Article: