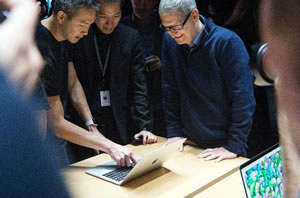 MSN:  Apple chief Tim Cook announced Apple is creating a fund to get more people in the US to do "advanced manufacturing," kicking it off with a billion dollars.

Apple investing in high-tech manufacturing in the United States would come as rare common ground with US President Donald Trump, who hammered away at the theme during his campaign for office last year.

"We are creating an advanced manufacturing fund," Cook said in an interview broadcast on CNBC.

"We are initially putting one billion dollars in the fund."

Cook pointed out that apple spent more than $50 billion in the US last year -- buying from suppliers such as Corning Glass, working with developers behind applications for the California company's devices and more.

Apple has about 80,000 employees in the US and plans to hire thousands more "in the future," according to Cook.

"One of the thing you should do is give back."

Apple planned to borrow money for the new fund despite having a fortune in coffers overseas because of the tax hit that the company would suffer if it brought profit home, according to Cook.  Full Article: