Robotmaster has its first authorized distributor in Thailand

01/19/15, 01:35 PM | Additive & 3D Printing, Design & Development
We are proud to announce that Golden Robot has become the first authorized distributor of Robotmaster in Thailand

Drones: They Have Cameras, They Can Fly, And They Are Looking At You

01/15/15, 04:59 AM | Additive & 3D Printing, Design & Development
With the popularity of drones, privacy and security concerns are on the rise. One Texas-based company has a solution: Drone Detectors.

01/14/15, 04:54 AM | Additive & 3D Printing, Design & Development
For household robots ever to be practical, theyll need to be able to recognize the objects theyre supposed to manipulate. But while object recognition is one of the most widely studied topics in artificial intelligence, even the best object detectors still fail much of the time.

Robots Learn to Use Kitchen Tools by Watching YouTube Videos

01/12/15, 10:07 AM | Additive & 3D Printing, Design & Development
Grandville Public Schools has always been a leader in competitive robotics. The school district started with one High School FIRST Robotics team in 1998. 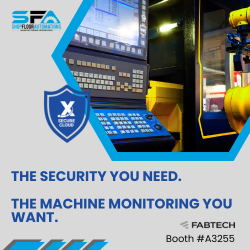 Disparate machines, each with a unique control system and communication protocol with varying ages, can create challenges for manufacturers driving continuous improvement initiatives. There is often limited visibility to make data-driven decisions that can impact every aspect of a manufacturing organization. The Scytec DataXchange machine monitoring solution resolves these issues by capturing real-time, Industrial Internet of Things (IIoT) data from a variety of equipment - from CNCs and PLCs, to robots and manual machinery - through universal machine connections. Leveraging automated data collection, DataXchange exposes and synthesizes equipment data to give your teams full transparency on the shop floor to transform your business into a smart factory.
More Advanced Manufacturing and Factory Automation Products | Feature Your Product