This bimodal distribution is rampant throughout industry. It can be very simply described as "too much of the wrong and too little of the right" at any point in time and "too much in total" over time.

09/21/17, 09:42 AM | Automation & IIoT | IIOT, Software and Smarts | Wind River
What do I want to eat yesterday? Seems like a strange question. Yet IoT systems are architected to often ask very similar questions by aggregating a massive amount of data in a central repository where every so often a data scientist can evaluate and perhaps realize some insights that would have been best realized and responded to at the time the events were taking place at the edge. IO-Link (IEC61131-9) is an open standard serial communication protocol that allows for the bi-directional exchange of data from sensors and devices that support IO-Link and are connected to a master.

Elon Musk: Robot software will make Tesla worth as much as Apple 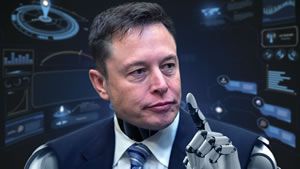 Jeremy C. Ownens for MarketWatch: Musk will put his machinery where his mouth is with Model 3, battery and solar panel production lines launching soon

02/21/17, 08:38 AM | Supply Chain, Engineering | Software and Smarts
Promess became involved with the battery manufacturer when the hydraulic presses, originally specified for both the pressing and assembly operations, proved to be unable to deliver the level of consistent process control required.

The use of a Real-Time Operating System (RTOS) is increasingly common in embedded software designs.

Network connectivity of industrial equipment and devices is a vital element of Industry 4.0. If the connection fails, all data communication from field devices to back-end servers and cloud networks will be halted, disrupting the operation of Industry 4.0.

This cannot be a simple extension of todays processes, but needs to be a complete rethink of how manufacturing and production systems are designed to take full advantage of the cloud and the analytics that it brings to bear.

Symmetric Multiprocessing or Virtualization: Maximizing the Value and Power of a Soft-Control Architecture

For a truly simplified and streamlined architecture that is high-performing, scalable, efficient. and built for long-term value, an SMP-enabled Soft-Control Architecture is recommended.