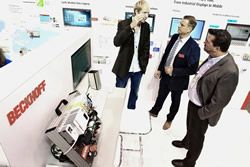 By Mike Bacidore, editor in chief for Control Design:  How are you getting your share of the pie that is the $227 quadrillion Industrial Internet of Things (IIoT)? That’s a lot of money, and there’s plenty to go around, so what are you doing to cash in on this next industrial revolution? OK, to be fair, I made up that number. But, unless you’re a research analyst or someone putting together Q3 forecasts for your business unit, you didn’t even give that number a second thought. And you probably shouldn’t. It doesn’t really matter. That number is as justifiable as it is arbitrary. Just pick an amount and then create a scenario and a timetable you can defend. “If you torture data long enough, it will confess,” Ronald Coase once said. The famed British economist also believed that the study of real-world markets was much preferred to speculating on theoretical ones. In reality, this bold new landscape of connectivity has yielded opportunities for revenue streams steered by embankments of innovation. Nowhere was that more evident than at Hannover Messe in Germany, where Industry 4.0—the preferred European term, which includes IIoT, cyberphysical systems and more—was impossible to avoid and insistent in its resolve.   Cont'd...

04/28/16, 05:07 AM | Automation & IIoT, Engineering | Hannover Messe
C-Labs delivers security, ease of deployment and human machine interface out of the box

04/26/16, 05:21 AM | Automation & IIoT, Engineering | Hannover Messe, Smart Factory
Signing of Memorandum of Understanding at the Hannover Messe Agreement on potential for the joint development of automation standards for the electronics industry Partners intend to cooperate in line integration and automation concepts "We want to build on the spirit of innovation in the USA," said POTUS Barack Obama in his opening speech. This spirit has been driven by Germany and HANNOVER MESSE, especially over the past 70 years. Obama added that the USA has now created new production facilities, subsidy schemes and jobs in recent years to help reach this goal. In what is likely his last visit to Germany as President, Obama spoke in particular about the TTIP free trade agreement. He believes that there are too many obstacles restricting trade between the EU and the USA. Different regulations and standards lead to higher costs. Therefore, one of TTIP's aims is to establish harmonized high standards. Obama also promoted the USA as a production location for European companies. Angela Merkel gladly took the opportunity to respond:  "We love competition. But we also like to win,"  replied the German Chancellor. A challenge with a smile. In her speech, Merkel emphasized that cooperation is essential for the future of industrial production - in a transatlantic partnership. "We in the EU want to lead the way, together with the USA," said the Chancellor, referring above all to the development of global communication and IT standards for integrated industry. However, the opening ceremony at HANNOVER MESSE 2016 was more than a meeting of Heads of State. Amidst musical numbers and dance performances by humans and machines, German Minister for Education and Research, Prof. Dr. Johanna Wanka, presented the coveted HERMES AWARD for industrial innovation. This year's winner is the Harting Group with its intelligent communication module, MICA.   Cont'd...