01/21/15, 02:17 PM | Additive & 3D Printing, Design & Development
Some industrial robots are hulking, highly specialized pieces of machinery that are cordoned off by cages from human factory workers.

RoboGolfpro Among Most Innovative Exhibitors at PGA Show in Orlando

Robotmaster has its first authorized distributor in Thailand

01/19/15, 01:35 PM | Additive & 3D Printing, Design & Development
We are proud to announce that Golden Robot has become the first authorized distributor of Robotmaster in Thailand

Drones: They Have Cameras, They Can Fly, And They Are Looking At You

01/15/15, 04:59 AM | Additive & 3D Printing, Design & Development
With the popularity of drones, privacy and security concerns are on the rise. One Texas-based company has a solution: Drone Detectors.

01/14/15, 04:54 AM | Additive & 3D Printing, Design & Development
For household robots ever to be practical, theyll need to be able to recognize the objects theyre supposed to manipulate. But while object recognition is one of the most widely studied topics in artificial intelligence, even the best object detectors still fail much of the time. 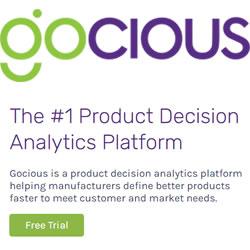 What are product decision analytics? Configurable products, including assemble-to-order, bring customization and choice to customers. They are also complex to plan. Each configurable product can have many possible variants, some of which are not buildable or don't meet the needs of the customer. Gocious enables you to analyze and define your product line features and configurations early, before detail design and production, to reduce time-to-market, waste, and rework.
More Advanced Manufacturing and Factory Automation Products | Feature Your Product

Reshoring or…rightshoring? - Why a successful reshoring strategy must focus on quality

Packaging is Essential in Time of Need