Makerbot Labs Is One Step Toward Open Source 3D Printing 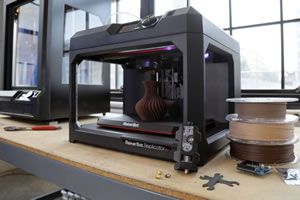 Darren Orf for Popular Mechanics: Makerbot describes this new platform as a place, built for creators, who want to experiment with 3D printing but still have the bedrock of the platform to fall back on if need be.

Brian Heater for TechCrunch: MakerBots MinFill arrived quietly last night as a firmware upgrade for existing customers, and the company is already calling it a "big benchmark in speed and widespread adoption of 3D printing."

MakerBot is laying off a third of its staff, narrowing focus under Stratasys

Shawn Knight for TechSpot:  3D printing ordinary household goods may be able to save users a bit of coin but consumers aren’t buying it – literally – and that’s forcing one company to downsize its workforce. In what is becoming a common occurrence, MakerBot recently announced additional restructuring that’ll see the company shed 30 percent of its staff. CEO Nadav Goshen said greater focus on long-term goals is key to their success and to get there, they must reduce the “pressure and distraction” of chasing short-term market trends and focus on their core products. The executive didn’t say which divisions would be hit hardest, nor do we know exactly how many employees are being let go although TechCrunch estimates the figure is probably between 80 and 100. Specifically, MakerBot will be integrating hardware and software product development under one team that’ll be led by VP of Engineering Dave Veisz. Current Director of Digital Products, Lucas Levin, is also being promoted to VP of Product, we’re told, and will lead product management across hardware and software.   Cont'd...

The Rise and Fall of the Everyman Tycoon Article about the rise and fall of MakerBot by Andrew Zaleski at Backchannel: Itwas October 2009 when Bre Pettis — his unmistakable sideburns and dark-rimmed rectangular glasses framing his face — took the stage at Ignite NYC, threw his hand in the air, and shouted “Hooray!” two times. A PowerPoint slide lit up behind him, revealing a photo of a hollow wood box crisscrossed with wiring. Bouncing up and down, his profuse mop of graying hair flopping about, Pettis began: “I’m going to talk about MakerBot and the future and an industrial revolution that we’re beginning — that’s begun.” A former art teacher, Pettis had emerged as a key character in the growing maker movement of the late 2000s, a worldwide community of tinkerers who holed away in makeshift workshops and hackerspaces, equally at home with tools like old-school lathes and contemporary laser cutters. Pettis had begun his ascent in 2006, producing weekly videos for MAKE magazine—the maker movement’s Bible—that featured him navigating goofy tasks such as powering a light bulb with a modified hamster wheel. In 2008, he cofoundedthe NYC Resistor hackerspace in Brooklyn. By then, Pettis was a star. A year later, he launched a Brooklyn-based startup with friends Adam Mayer and Zach Smith (also a NYC Resistor cofounder) called MakerBot... (full article)