07/09/15, 07:24 AM | Additive & 3D Printing
The gripper spider for fiber composite components is a great example how significant this contribution to the intelligent factory can be in practice.

How Does the Accident in Germany Affect Industrial Robot Safety?

07/08/15, 05:20 AM | Additive & 3D Printing, Processing & Handling
by Patrick Davison, Director of Standards Development, Robotic Industries Association:  Last week, an unfortunate fatality involving an industrial robot and a worker occurred at a Volkswagen plant in Baunatal, Germany.  The Robotic Industries Association (RIA) and its member companies express its deepest sympathies to the victim’s family, friends, and colleagues. According to news sources, the worker was part of a contracting crew responsible for setting up the robot, and was working inside the safeguarded space when the incident occurred.  A second member of the contracting crew was standing outside of the safeguarded space and was not harmed. The international media response to the incident was aggressive, swift, and expounded on topics that were not relevant to the incident.  AWashington Post article referenced the dangers of Artificial Intelligence and posed the question, “Should the world kill killer robots before it’s too late?”  In another story, a Financial Times journalist with a name similar to a popular character in The Terminator franchise started a social media frenzy with a tweet.  A video from Ireland expounds on random tweets regarding the incident with backdrop footage of the Honda ASIMO robot and manual automotive operations.  Also, according to this article on an automotive news and gossip site, a Times of India article posted a photo of a gun-wielding toy robot beside the story.   Cont'd...

07/06/15, 03:19 PM | Automation & Networking, Additive & 3D Printing
By TIMOTHY AEPPEL and MARK MAGNIER for WSJ.com -  Having devoured many of the world’s factory jobs, China is now handing them over to robots. China already ranks as the world’s largest market for robotic machines. Sales last year grew 54% from a year earlier, and the boom shows every sign of increasing. China is projected to have more installed industrial robots than any other country by next year, according to the International Federation of Robotics. China’s emergence as an automation hub contradicts many assumptions about robots and the global economy. Economists often view automation as a way for advanced economies to keep industries that might otherwise move offshore, or even to win them back through reshoring, since the focus is on ways to reduce costly labor. That motivation hasn’t gone away. But increasingly, robots are taking over work in developing countries, reducing the potential job creation associated with building new factories in the frontier markets of Asia, Africa or Latin America.   Cont'd...

07/06/15, 10:40 AM | Additive & 3D Printing, Design & Development | Clearpath Robotics Inc
Almost all robots today use lasers for remote sensing. This means that the robot is able to tell, from a distance, some characteristics of an object.

07/04/15, 06:10 AM | Additive & 3D Printing, Design & Development | Barrett Technology
"Barrett Technology is not only creating jobs in Newton and strengthening the local economy, but bringing products to market that will help revolutionize the global health care industry"

Deadline Is Here for 2001 Congressional Mandate to DoD: Have 1/3 of Operational Ground Combat Vehicles Unmanned by 2015 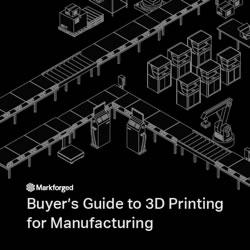 3D printing has become a powerful force in today's manufacturing industry from prototyping to tooling and fixtures to custom, end-use parts. Many businesses struggle to find the right solutions to fit their needs and provide ROI. Selecting the right platform to prevent manufacturing roadblocks is vital to optimizing your manufacturing line productivity. Download the all new buyer's guide to help you evaluate the benefits of 3D printing and dispel misconceptions, understand the pros/cons of various 3D printing processes and materials, and assess the key considerations in selecting a 3D printer.
More Advanced Manufacturing and Factory Automation Products | Feature Your Product

Data Integration is a Key Driver for Industry 4.0 in Polymer Manufacturing