Kagan Pittman for Engineering.com: The robot combo has been tasked with automating a black oxide process, which involves dipping parts in various chemical baths in a precise sequence. 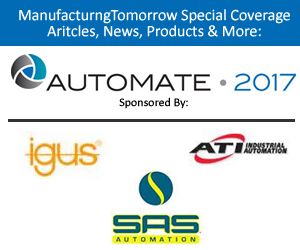 Automate 2017 will be held from April 3rd - 6th at Chicago's McCormick Place. This ManufacturingTomorrow.com Special Tradeshow report aims to bring you news, articles and products from this years event.

Do the benefits of robotics outweigh the heavy demands on infrastructure?

Ben Rossi for Information Age:   Robotics has already been deployed in manufacturing to great effect for over a decade, performing delicate and precise tasks with greater accuracy than humans. But now cutting-edge robots and other smart machines are set to join forces with the rapidly expanding Internet of Things, which Gartner estimates will total 25 billion devices by 2020. In healthcare, robotic services are already operating pharmacy dispensers and robotic trolleys are now deployed in a growing number of hospitals. In hospitality, robots deliver services such as drinks dispensing and automated trolley deliveries. Robots have even made their way into education, where they are being deployed successfully as a tutor, tool or peer in learning activities. But what impact will this large-scale adoption of robotics have on existing networks as they encounter inevitable further strain?   Cont'd...

Boy, do Fanuc and Cisco have a deal for your factory Fanuc and Cisco Systems are set to commercialize a technology this summer that promises glitch- and disruption-free factory operations. The Internet of Things-based system monitors machinery and spots signs of possible abnormalities so that parts can be replaced more smoothly and without affecting operations.          A one-minute suspension at a car factory generally costs around 2 million yen ($16,900). If, for example, a gear breaks and operations are halted for 60 minutes to replace it, the costs would be 120 million yen. Frequent line stoppages could also affect product quality.      The Fanuc-Cisco system uses sensors attached to each robot carrying or welding parts to monitor temperatures, vibration and other conditions. Data streams are sent via the Internet. A computer analyzes the data and decides which parts will likely need fixing and when. The system also places orders for replacements. The accuracy of the system's prediction and analysis functions will increase as data accumulates, representatives from the companies said.   Cont'd...