Not many students can claim they have hands-on experience with automation and robotics going into an interview. Looking at the question with a macro lens, our students are offered job opportunities on being well-rounded, even at the sophomore-level when many accept summer/semester-long internships. 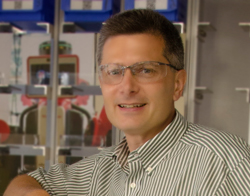 About Jason Low
Jason Low is a Lecturer in the Edward P. Fitts Department of Industrial and Systems Engineering at NC State University. Mr. Low is responsible for the creation of the department's state-of-the-art Automation Laboratory and, over his tenure, has helped spearhead the evolution of the department's manufacturing curriculum. He teaches "everything manufacturing" and advises research in areas of machining, advanced manufacturing systems, automation and robotics. Mr. Low's research thrust is in the area of smart systems as they pertain to factory automation and robotics. Novel methods of adaptive control using vision for safe H-R collaboration is of particular interest to him and a growing cross-disciplinary team of students.

Can you start by telling us about the robots in the North Carolina State Industrial and Systems Engineering (NC State ISE) lab?

The robots we have in the NC State ISE department are all commercially available, industrial models used in a variety of assembly and processing tasks typical of those found in automotive, aerospace, pharmaceuticals and a variety of durable and non-durable goods industries. Their formats range from simple pick-and-place robots, often known as SCARA-type robots, to 14-axis articulated collaborative robots used in assembly and packaging operations.

Modes of programming run the gambit of what is commonly found in industry, from traditional teach-type architectures using pendants, to non-mainstream, off-line programming environments using open-source software. Off-line programming, although not new, has not been widely adopted by industry and is viewed as being a valuable tool in next-generation systems.

Robots are a common topic in today’s media and many are afraid our automated counterparts will take jobs away from humans. How are robots helping NC State ISE students land jobs after graduation?

This is a point well taken and in theory there is some truth to that point; robots do indeed replace some jobs that have been historically performed by humans. There is a common adage that states robots replace jobs that are dull, dirty and dangerous. From an industrial engineering standpoint, these are all important characteristics that can negatively impact production metrics and any business’s bottom line.

Let’s face it, no one wants to have a job classified this way. These jobs lead to deteriorating worker performance, much due to mounting dissatisfaction and boredom. Dangerous jobs are havens for chronic injuries and loss time accidents. So, yes, these are the jobs that are replaced and will continue to be replaced with robots.

What people are concerned about, and rightly so, is what happens to those human workers who are displaced. Those people are placed in jobs that are more satisfying and better suited to their skills. Raising standards and elevating working conditions helps all involved emotionally, mentally and physically.

Playing devil’s advocate, one may ask, when does the job takeover stop? Again, in theory, as robots become more advanced in their dexterity and sensory capabilities, other tasks/jobs will be candidates for replacement. Akin to the Industrial Revolution where mechanization transformed the way goods were produced, a similar disruption in our evolution will transform the way we work and what constitutes an “industrial” job. History has taught us that technology elevates the human condition. There is no evidence to suggest otherwise in the case of automation.

With new technologies come new applications and new jobs. Our students, while experiencing a very classic ISE undergraduate experience, find themselves well-poised to tackle problem sets from any field. No other discipline teaches systems-level perspectives to the extent of ISE. Automation has always lived at the crossroads of mechanical and electrical engineering disciplines.

Here at NC State, an ISE’s application familiarity, problem-solving skills and optimization headset really underscore the needs brought by industry and service sectors. ISEs are better poised than anyone else to fully leverage automation and robotics technologies. The companies that hire our graduates realize that.

NC State ISE has a strong manufacturing and automation program. How does this help ISE students optimize process and systems, especially while working alongside robots?

The uninitiated often equates automation as the golden key, i.e., it can solve all production problems. This gives rise to the closely held belief that robots are destined to take over everyone’s jobs. The key to studying and working alongside robots is that students come to appreciate not just the abilities of automation, but also its many limitations. Contrary to popular belief, robots are not perfect. Even the best, most expensive robots are not as precise, or repeatable as many pieces of “hard,” or fixed automation.

Often, complex problems can be reduced to simple solutions, using off-the-shelf components. By way of interacting with real industrial robots, students are able to pick up on the nuances of movement and the classic robot singularity problem. Frequently, only experiential learning can uncover potential issues. Our students are best-equipped at problem identification, root-cause analysis and solution development, in part due to the methods learned in optimization and simulation. The NC State ISE department has a storied past in these areas and our students excel when faced with real-world scenarios that can be tested in-situ.

What background / prerequisites are required for students to participate in the program?

In order to take our automation course offerings, students should be of senior-level standing and have completed the requisite courses in processes and product design and manufacture. Commensurate with the level, students should have also been successful in statics and an introductory course in EE principles and circuit theory. Many of the department’s courses are open to those from other disciplines. Perspective students brought from outside ISE enhance the dialogue and push the boundaries of course projects even further.

Robots by definition are programmable and flexible automation devices. One area that deflates the argument for fixed/hard automation is the traction being experienced by the mass customization market. At no other time in history has the consumer had so many options to customize purchased products.

Granted color, fabric choices and size variants make up the bulk of what some term customization, but where inroads are happening in the industrial robotics space is in something called “changeover”; this is the bane of production and the engineer that has to deal with it. Changeover involves the swap-out/switchover of tooling, fixtures and sometimes even machines in order to produce another product or product variant. Mass customization is rich with these issues. As size, shape, fasteners, etc. change, adaptability of the process must follow. Hard, or fixed automation cannot react to these changes as efficiently as robotics.

Along similar lines, product lifecycles are shortening. Fixed production lines and automation are disappearing and robots are backfilling these legacy systems. ISEs are challenged with adopting new technologies in robots to solve these challenges. Mass customization has driven a disruption of sorts in material handling and assembly applications. Cost drivers are now attractive enough where robotic solutions are viable. This opens the door for both industrial and controls engineers alike.

Complete production systems can be designed around robotics to serve this market. It is expected that opportunities at both the plant-level (end-user) and systems integrator level will flourish as customization continues to grow and manufacturers must face a new way to compete.

Does working alongside robots help NC State ISE graduates stand out in interviews?

Who would not hire any engineer who has worked with robots? Not many students can claim they have hands-on experience with automation and robotics going into an interview. Looking at the question with a macro lens, our students are offered job opportunities on being well-rounded, even at the sophomore-level when many accept summer/semester-long internships.

Several of our students have received internships and full employment offers upon graduation at major companies, many of which happen to be the largest users of robots. We know questions about robotic experiences come up in interviews and our students are well-equipped to answer questions to the point.

Examining the question with a fish-eye lens, the Edward P. Fitts Department of ISE at NC State is one of about 100 accredited industrial engineering programs in the nation. Of those programs, NC State’s ISE program has arguably the strongest manufacturing curriculum and is one of only a handful that has integrated a full complement of industrial experiences into its undergraduate curriculum, including automation and robotics. This, we know, makes a difference to employers who seek top talent, as is evidenced by the more than 500 companies that visit the NC State College of Engineering each spring and fall. Consistently, more than a third of these companies actively seek our ISEs and fill multiple positions each year.

One of the unique attributes of the discipline and the NC State ISE department is that ISEs wear many hats. Many of today’s jobs in engineering require systems-level thinking and keen business acumen. Even though our students do not take specific courses in business as part of the structured curriculum, they make for future leaders that are highly promotable due, in part, to refined project management skills and a solid background in engineering economy.

Similar arguments can be made across the board as we dissect the discipline and match skillsets to what makes businesses profitable. This is true as well with automation and robotics. Although a mere “piece of the puzzle,” automation can be loosely associated with multiple business processes, not just production. Robotics, a unique subset of automation, is tangible automation. This distinction places those that have experience with this equipment in their own distinct group. Any company looking for graduates with practicable exposure to robots knows where to find candidates.

In short, as the wearer of many hats, there’s a cumulative effect in placement rate.

What type of starting job can a student expect to qualify for?

Is there a range of starting salaries normally expected?

Based on undergraduate exit surveys taken as recent as last December, ISE graduates may expect starting salaries between $61K-$69K. Over recent years, a trend indicates this range narrowing and shifting higher. Consistently, these salaries track slightly higher than the average of all engineering disciplines (nine core engineering departments at NC State).