Fonons Canyon 3D Deep-Engraving System cost is less expensive, deep-engraves at almost 2X the processing speed, requires no consumables and is 100% maintenance-free. There is no workplace or environmental hazards with a superior quality of workmanship when compared to vertical milling machines. 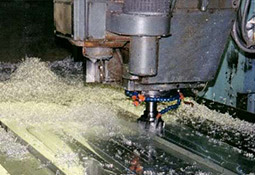 Milling is the machining process of using rotary cutters to remove material, a tradition dating back to the 1800’s.

Milling is a cutting process that uses a milling cutter to remove material from the surface of a workpiece by performing many separate cuts. The cutting action is classified as shear deformation. 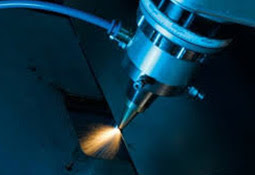 Fiber laser is a next-generation technology using a high-power energy source to perform the same function. Fiber lasers are compact and rugged, do not go out of alignment, and easily dissipate thermal energy.

A key factor for fiber lasers is that the fiber has a large surface-to-volume ratio so that heat can be dissipated easily. (Source: LaserFocusWorld)

Round 2: Quality of Workmanship:
CNC vertical milling machines show visible trochoidal marks and significant roughness. The Canyon 3D Deep-Engraving System in contrast show no visible marks with smooth, vertical cliff walls requiring no post-processing. There is no direct contact between the laser and the material reducing the chance of contamination or accidental marking. Fiber lasers also create a smaller heat-affected zone, which lowers the risk of material warping or defamation at the engraving site. Laser deep engraving is a more streamlined process than its mechanical alternative which often requires post-machining treatments. (Source: ThomasNet )
Winner: Fiber Laser

Round 3: Processing Speeds:
An aluminum application was deep-engraved down to a minimum depth of 0.01” requiring both a logo and rows of text. Fonon’s Canyon 3D Deep-Engraving System completed the operation in 2 minutes, 23 seconds.

Round 5: Consumables:
The Canyon 3D Deep-Engraving System requires no consumables.

Round 6: Environmental Impact:
The Canyon 3D Deep-Engraving System poises no environmental health risks to both the workplace and environment. Fumes are captured by a fume extractor and metal debris is capture via a vacuum table.

Round 7: Dependability:
The Canyon 3D Deep-Engraving System has a MTBF rating of more than 50,000 hours designed to operate under continuous hi-vibration, shock, and dust conditions.

CNC vertical milling machines are subject to both hard and soft crashes. Hard crashes occur in such a way that is harmful to the machine, tools, or parts being machined sometimes resulting in bending or breakage of cutting tools, accessory clamps, vises, fixtures, or causing damage to the machine itself by bending guide rails, breaking drive screws, or causing structural components to crack or deform under stress. A soft crash may not damage the machine or tools, but may damage the part being machined so that is must be scrapped. (Source: Wikipedia)
Winner: Fiber Laser

Round 8: Return On Investment (ROI):
Fonon’s Canyon 3D Deep-Engraving System cost is less expensive, engraves at almost 2X the processing speed, requires no consumables and is 100% maintenance-free. There is no workplace or environmental hazards with a superior quality of workmanship when compared to vertical milling machines.

Fiber laser deep-engraving is an art form in and of itself. Fonon’s Canyon 3D Deep-Engraving System incorporates proprietary laser processing IP setting the industry standard for quality of workmanship and processing speed. There is no other laser-based system that produces 3D deep-engraving images which compares to the quality of Fonon’s 3D Canyon Deep-Engraving System. 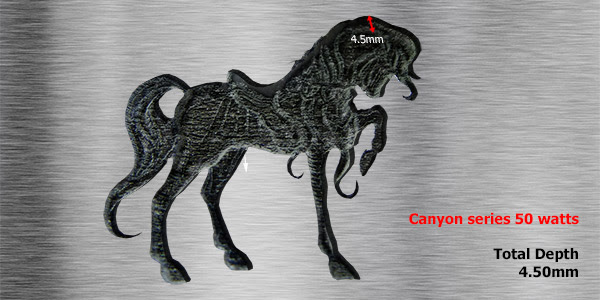