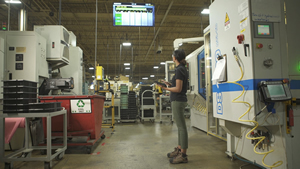 Stanley Black & Decker announced plans to open an Advanced Manufacturing Center of Excellence in downtown Hartford to accelerate its global Industry 4.0 "smart factory" initiative. Called "Manufactory 4.0," named after the original Stanley Bolt Manufactory founded in 1843, the 23,000-square-foot Center will be located at One Constitution Plaza and will employ approximately 50 Industry 4.0 professionals. The company has appointed Sudhi Bangalore, most recently WIPRO's Global Head of Smart Manufacturing and Industry 4.0 Solutions, to lead the center. The company is also launching an additive manufacturing accelerator with Techstars that will be housed at the new facility.

"Strong urban cores, and in particular a vibrant capital city, are essential to Connecticut's ability to thrive which is why we decided to locate this important new initiative in Hartford," said Stanley Black & Decker's President and Chief Executive Officer Jim Loree. "Our team has worked closely with Mayor Bronin's office, and we are excited to be a part of building a vibrant, strong capital city. With the budget now passed, the hard work can begin to solve some of the state's structural fiscal challenges and put the state on a more sound economical path. We cannot lose the sense of urgency and must recognize that the state is at a critical juncture. As a company founded in New Britain, Connecticut, almost 175 years ago, we have expressed our commitment from a social responsibility perspective to being part of the solution."

"Our Manufactory 4.0 will serve as the epicenter for the latest technologies and processes with respect to Industry 4.0," said Don Allan, Chief Financial Officer for Stanley Black & Decker. "Just as Connecticut was at the heart of the first three Industrial Revolutions and has continued to have a strong manufacturing presence, we believe that the state has the potential to be a leader for what is often called the Fourth Industrial Revolution – the automation of manufacturing that includes the internet of things, cloud computing, artificial intelligence, 3-D printing, robotics and advanced materials. We are thrilled that Sudhi has joined the company to lead this effort, which is a critical component of our company's 22/22 strategy."

"Today's announcement further cements Stanley Black & Decker's reputation as a leading innovator in advanced manufacturing, and a tremendous partner to the State of Connecticut," said Governor Dannel P. Malloy. "The Advanced Manufacturing Center of Excellence will be critical in spurring innovation and ensuring that our state continues to build upon our reputation as a global leader in advanced manufacturing. We are grateful to CEO Jim Loree for his partnership and extraordinary vision and commitment not only to Stanley Black & Decker, but to our capital city and the State of Connecticut as a whole."

Sudhi Bangalore will serve as Stanley Black & Decker's Vice President of Industry 4.0, reporting to Allan, and has a deep expertise in Industry 4.0 and Digital Manufacturing. Leveraging a unique combination of operations and technology background, he has served as an expert advisor to shape and deploy Industry 4.0 strategies for several global customers. Prior to serving in his current role at WIPRO, he was the company's Global Practice Head for Industrial Automation. He has held operations and business unit manager leadership roles across a number of leading technology companies, including Danaher Corporation, Siemens and Rockwell Automation. He earned a Bachelor's in Electronic Engineering from Bangalore University, a Master's in Industrial Engineering from the University of Louisville and an M.B.A. from Kent State University.

In addition, to support and accelerate innovation in Industry 4.0, the company has made a three-year commitment to partnering with Techstars, one of the world's best startup accelerators, and is announcing the launch of the STANLEY+Techstars Additive Manufacturing Accelerator. The mentorship-driven, entrepreneurial accelerator program will identify 10 startups in the additive manufacturing space to participate in the program in the program's first year. Companies will co-locate with Manufactory 4.0 and have access to mentoring and resources to grow their ideas into viable businesses, and bring new technologies to market. Additive manufacturing refers to 3-D printing and the collection of technologies that are used throughout the process, including those involved in rapid prototyping, rapid manufacturing and free form fabrication, among others. The application process will begin in January 2018. Similar programs will be run in 2019 and 2020, with 30 potential startups completing the process.

"Additive manufacturing is a field that is constantly evolving and will significantly change the manufacturing environment of the future," said Corbin Walburger, Vice President of Business Development for Stanley Black & Decker. "The STANLEY+Techstars Additive Manufacturing Accelerator demonstrates our commitment to this emerging industry, and shows our intent to stay at the forefront of technological change and incorporate another example of innovative and disruptive technologies into our business model."