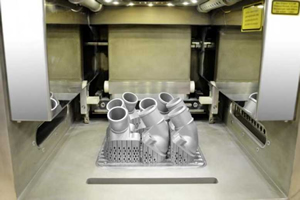 Nell Walker for Manufacturing Global:  While stable metal additive manufacturing is a relatively new concept, advancements are already being made.

Dr. Ben Dutton from the Manufacturing Technology Centre in Coventry has developed a new technique for improving the efficiency of this process, by allowing components to be inspected during the build process, thus reducing waste.

Using laser ultrasound rather than camera imaging, it is hoped that Dutton’s work could encourage the use of 3D printing within mass manufacturing industries, as it removes the need for a separate inspection process. His work will be officially revealed at the NDT 2017conference in Telford, UK, on the 6th of September.

Dr. Dutton, an expert in non-destructive testing, said: “Currently some additive manufacturing systems incorporate in-process monitoring but they use cameras to take snapshots of the layers as the item is being created.

“The problem with cameras is that each new layer of powder can conceal part of the defect. With NDT methods such as laser ultrasound, there is a certain amount of penetration so you can look below the top layer and detect sub-surface defects in a non-contact way.”  Full Article: