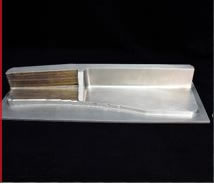 Prodways Group’s Rapid Additive Forging technology was built on a continuous R&D effort and a strengthening of its 3D metal printing offering. The 3D printer developed uses a robot equipped with a head depositing molten metal in an atmosphere of inert gas. Accordingly, the metal is deposited layer-by-layer and the large part is completed within a few hours. This innovative technology quickly manufactures titanium blanks with very similar geometry compared with the final part. These blanks are then finish-machined, thus avoiding considerable losses of material which can represent up to 95% of the metal block with traditional machining processes.

The RAF Technology was developed in collaboration with Commercy Robotique, a subsidiary of Groupe Gorgé specialised in robotised welding for more than 40 years. A patent application was filed by Prodways Group.

This process has been tested on various metals. In particular, it is used to print titanium, a metal seeing increased use in new-generation aircraft. The third generation of the prototype is able to produce parts of more than 70 centimetres in size. Prodways Group is currently developing a version which would print parts of up to 2 metres in the main dimension.
With respect to other comparable technologies developed by market players, the Prodways Group’s Rapid Additive Forging technology uses a distinctive metal deposition technology focusing on the metallurgical quality and the repeatability of the process. The first metallurgical tests conducted on different parts revealed an absence of porosity and greater mechanical resistance compared with usual 3D metal printing techniques using laser or electron beam sintering.

Several players in the aeronautical industry believe this technology family could be applied to nearly 50% of the titanium parts used to manufacture an aircraft and generate savings of up to 50% on the cost of parts.

Prodways Group will regularly provide updates on developments in this technology, which has already attracted the interest of several leading industrial groups.