With so many various types of M12 connections and options to choose from, such as pin count, pin positions, connection coding and IP ratings, the selection process can seem rather overwhelming. How do you know which connections are right for your specific application?

M12 Connections Explained: What Are They & Which Are Best For Your Purpose?

M12 CONNECTIONS … WHAT ARE THEY?

The name M12 came about pretty simply: M stands for the unit of measurement taken (in this case, metric) and 12 stands for the length of the diameter taken across the outside of the threads (12mm). M12s have circular connections and, because of their circular shape, they possess high current capabilities and are much easier in obtaining ingress protection (IP) ratings, or ratings that tell how well connections are able to keep out elements such as dirt, sand and water, than their rectangular counterparts. This makes them an excellent choice for use in factory automation applications, or in any tough or harsh environment where dirt or dampness is involved.

Choosing the right M12 connections depends on your specific application. M12 connections come in a variety of pin positions, anywhere from 2, 3, 4, 5, 6, 8, 12 and 17 pins. The number of pins varies depending on the signal type and number of signals, connection coupling and code.

Different pin positions have been created to coincide with the different types of coding that have been devel- oped according to function. This way the pin positions act as a fail-safe and eliminate any mistakes of cables being connected that were made for different coding. For instance, you would certainly connect cables that both have A-coding and are being used to hook up sensors with corresponding equipment, however; you would not want to connect an AC power cable to an Ethernet cable. 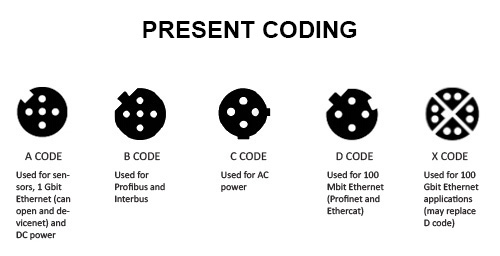 Below is a description of the different coding classifications currently used in factory automation and what they mean.

B-coding is unique in that it contains a reversed single keyway, which allows 2 unique M12 connections to be mounted on the same panel without the risk of incorrectly coupling connections to equipment with varying voltage and amperage. B-coding for factory automation cables is used in fieldbus connections involving Profibus and Interbus. B-coding connectors typically have anywhere from 3 to 5 pins.

C-coding (also known as Micro-AC) is strictly used in cases where AC current is involved, such as with AC actuators, sensors and other AC devices. Because of this C-coding is not as commonly used as the other coding types. Connections with C-coding all have extended grounding pins and double keyways for added safety to prevent them from being mistaken for other similar-looking connections or being coupled with the wrong cables. C-coding connections have anywhere from 3 to 6 pins.

D-coding is specifically used in network cables for industrial Ethernet applications to transfer data up to 100-Mbits. The insides of cables with this type of coding consist of either 4 wire connectors (D-coding) with 2 pairs of Cat 5e cables or else M12 8 wire (A-coding) connectors with 4 pairs of Cat 5e cable. D-coding can also be used with Profinet, Ethernet/IP and EtherCat systems. D-coded connections usually have 3 to 5 pins. 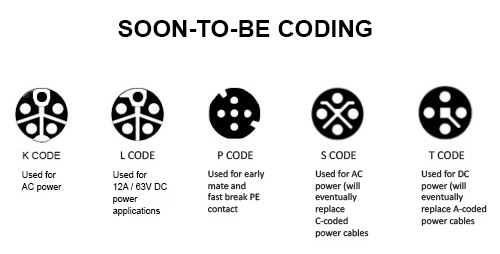 As mentioned earlier, the circular shape of M12 connectors makes it easy to assign them IP ratings which classify how well connectors are able to block out unwanted elements that can cause corrosion and other problems. Because of the rugged design of M12 connections, they are an ideal choice for use in factory automation.

The International Electrotechnical Commission (IEC) came up with these rating classifications and international standards which set the bar for what connections can withstand. There are three common IP standards associated with M12 connections which are IP67, IP68 and IP69.

What are the differences?

Mueller Electric offers M12 cable connections with features such as:

What’s more, if your automation takes place in a moist environment or if your equipment requires washdowns, factory automation cables with a minimum IP rating of IEC-IP68 are recommended. These cables provide a strong, secure and sealed connection between your automation equipment and robots, sensors, actuators, machine vision systems, motor-operated switches and other smart components, even in humid or moist conditions. The IEC-IP68 rating is highly recommended for factory automation in both the food and beverage and measurement and control industries. The IEC-IP69 rating is what is most often used in road vehicle applications. All of Mueller Electric’s M12 connections have an IEC ratings of IP67, IP68 and even IP69, the highest IEC rating available.

CONTACT MUELLER ELECTRIC:
Still have questions about M12 connections? Give Mueller Electric a call at 800.955.2629 or contact us here. One of our knowledgeable staff members will be happy to help you select the connections that are best for you. With a wide array of factory automation connections, including a large selection of UL-listed connections in our factory automation catalog, Mueller is sure to have something for everyone. If by chance you do not see what you are looking for, Mueller also specializes in creating custom-made cable orders and can put together a solution just for you and your unique application needs! Fore more information on M12 connections, feel free to visit Mueller Electric at www.muellerelectric.com.