For this particular project, Dan Nobles and Slice Engineering decided carbon fiber nylon filament would be the best option. Engineered for its intense durability and stability, a carbon fiber nylon material would be capable of handling the high-heat experienced in an engine. 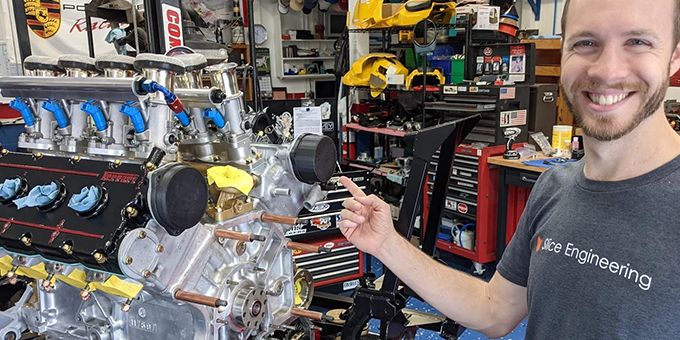 Have you ever needed a low-cost solution to what seemed like a budget draining project? Whether it was for a teeny, tiny hobby related part that makes no sense to machine, or a manufactured mold to be used repeatedly, 3D printing is no stranger to simply solving complex problems. What about replacing, say, parts for a 1983 Ferrari Mondial? That’s right - a Ferrari.

Two engineers put their 3D printing know-how to the test. Jeff Wilkinson and Dan Nobles were coworkers years ago and have kept in touch to work on various projects together, including a rebuild and modification of a 1983 Ferrari Mondial.

Part of Jeff’s rebuild of the Ferrari involved replacing the sunroof parts and a significant modernization of the old ‘83 Quattrovalvole Ferrari V8. He converted from the original carbureted fuel delivery system to an electronic fuel injection setup, and from distributors to a modern coil on plug ignition system. The latter conversion is where the troubles started. As any car collector will understand, Jeff cares a lot about both the form and function of his vehicles, especially ones that he is sinking many hours into. Moving away from the distributor system to modern injectors with coil packs meant either leaving the end of the spinning camshafts exposed (a major hazard) or reinstalling non-functioning distributor caps. Together, Jeff and Dan concluded that using 3D printed caps to cover the camshafts meant the conversion could go on as planned, creating a safer, more reliable car, without the huge expense of machining custom parts.

For this particular project, Dan Nobles and Slice Engineering decided carbon fiber nylon filament would be the best option. Engineered for its intense durability and stability, a carbon fiber nylon material would be capable of handling the high-heat experienced in an engine, as well as provide a matte-black finish to the distributor caps and sunroof parts in Jeff’s Ferrari. With a combination of NylonX from Matterhackers and CarbonX from 3DXTech, Slice Engineering printed Dan Noble’s designs using Slice’s upcoming Copperhead™ Hotend upgrade bundle for the Raise3D Pro2 and the Vanadium™ Nozzles on an Intamsys Funmat HT Enhanced.  Dan Nobles also printed additional parts on his Tronxy 3D printer retrofitted with a Mosquito® Magnum Hotend for higher flow rates and reliability.

The polyamide (Nylon) printed parts were dimensionally accurate enough to be fitted on the engine and sunroof assembly right away, though the camshaft caps will require some post processing, such as sanding and paint, to match the beautiful aesthetics of the hand-painted valve covers. Jeff still has a long way to go before the Mondial is fully operational again, including fully refinishing the interior, but once it is ready to go, the 3D printed parts will withstand many hours in service.

As Jeff Wilkinson and Dan Nobles were able to find a creative solution to a complex problem, their curiosity drove them to “let form follow function”. Whether you are an engineer, maker, manufacturer or all of the above, Slice Engineering will be at your service to provide you with the highest quality 3D printer components, enhancing your innovations for success.

About Slice Engineering
Slice Engineering (FL, USA) is one of the fastest-growing startups in the additive manufacturing industry. We optimize 3D printer thermodynamics. Our dedicated team of engineers designs and manufactures US-made, high-end 3D printer components for 3D printer manufacturers, businesses, and consumers interested in pushing the boundaries of what is possible with FDM technology. Our ever-growing IP portfolio includes the well-known Mosquito and Copperhead extrusion technologies, and client list includes the US Navy, NASA, Argonne National Laboratory, Lulzbot, Stacker3D, Hage3D, Michigan State University, University of Kentucky, and Case Western Reserve University among others.