The forklift manufacturer Crown relies heavily on robotic welding automation for fabrication/production of their equipment in the Roding (Germany) facility. The results for increased productivity and weld quality are quite impressive and therefore the number of automated welding systems has continued to expand over recent years. As a result, the addition of more robots to production requires the addition of more experienced programming personnel.

Bottlenecks can occur when robot cells are taken out of production in order to program additional part variants or new part assemblies. Looking towards the elimination of these inefficiencies in lost production time, Crown has now begun to replace the time-consuming manual teaching of the robot systems with simulation-based offline programming for tool path generation.

For this, they rely on the FASTSUITE Edition 2 software and the CENIT team!

Crown is one of the five largest forklift manufacturers in the world. The US-based, family-owned company has a global production, sales, and service network with 19 manufacturing sites around the world and more than 500 sales offices in 84 countries.

As a customer-oriented innovation leader, Crown regularly sets trends in the field of material flow solutions. The development process involves technology challenges from the beginning of work to a fully developed product design. Crown has a "human-centered design" approach. Each forklift is designed to improve productivity, operator comfort, and safety at the customer's site, ultimately optimizing the total cost of ownership of the fleet. Crown has made a strong reputation for itself in industrial design and has received several awards for it.

For the production of forklifts, it is critical to develop robust and durable products that meet the customer’s high demands for quality, ergonomics, and reliability, as well as meeting safety-relevant requirements.

High quality standards based on a customer-oriented focus are met by Crown’s high vertical integration: up to 85 percent of the components are produced in-house.

Those who visit the Roding facility will get an impression of how this orientations is implemented. Crown employees are justifiably proud of their excellence in manufacturing that is built around a unifying team effort.

Crown has been producing forklifts in the Roding facility since 1986. Over the course of more than 30 years, this has repeatedly been the starting point for innovations in manufacturing. In this respect, it is not surprising that Mads Adreasen, Director of Manufacturing, has pushed ahead with the introduction of welding robots for his site. Today there are several complex robot systems with up to 13 axes in the production floor. 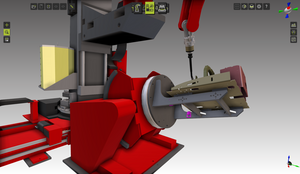 The well-known advantages of robotic welding have also been proven for Crown: always perfect tilt angle, constant, optimal welding speed and the use of suitable welding parameters….all this with absolute repeatability. Thanks to the automation, all prerequisites for a weld seam of the highest quality level are always met. The Roding facility has thus achieved a very high increase in productivity for individual process steps.

Programming and fixture construction play an important role. Every welding cell is only as good as its programming, while the fixture ensures the optimum positioning and accessibility of the workpiece, which is often very demanding.

Some of the solid steel components have seams that are difficult to access or many welds on a small area. This makes manual teaching and fixture construction difficult.

There are many components and component variation to each product. Additionally, new parts are constantly being added to production. This means that the employees have their hands full to stay on schedule. Downtimes hinders efficiency significantly.

The team was aware of the possibility of offline programming. Here, Florian Braun, project manager in manufacturing engineering, saw an opportunity to optimize the use of welding robots. He took charge of the market research and was able to convince all those involved internally that two companies should be invited to participate in the benchmarking process.

One of these suppliers was CENIT with the software FASTSUITE Edition 2, a 3D simulation platform that offers a sophisticated technology package specifically for offline programming of welding processes.

The software features in demand at Crown:

In the benchmark, the task was to program a component with the OLP software on a Reis compact weld cell and perform a download. Above all, it was judged how well the download works and how close the robot follows the contour of the weld path.

Before the test, there was some skepticism as to whether the FASTSUITE software could really support the difficult and optimally coordinated work steps efficiently. There were concerns about whether offline programming would deliver the required Crown quality and the fear that the software would be difficult to learn or cumbersome to use. 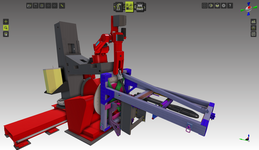 The performance of FASTSUITE was convincing in the field test. Although the cell had not yet been calibrated and prepared for offline programming during the test, the toolpath was already very close to the reference line. The close cooperation of the FASTSUITE developers with leading robot manufacturers had proven its worth. The software has a controller add-on for the welding cell from Reis and enables a very precise simulation and optimization of the system on the PC. In addition, the practical experience of CENIT's employees in the offline programming of a wide variety of systems helped to read in the robot program on the welding cell and run it safely.

FASTSUITE was able to demonstrate its “ease of use” and created a needed confidence that the implementation was a worthwhile project for all involved. The high level of expertise in welding production that CENIT brought gave Crown additional assurance that they had found the right partner.

FASTSUITE Edition 2 had clearly established itself during the benchmark and received the order for implementation. The first welding cells were integrated into the simulation environment beginning summer 2017.

The implementation project has three phases. At startup, CENIT configures the software for the requirements of the corresponding system (phase 1). This is followed by the creation of a digital layout model of the cell (phase 2) that corresponds to the real installation.

For this purpose, the FASTSUITE team builds the welding cell with the robot, tools, system components, and all collision-relevant features from the 3D CAD data. The part reference, TCP (Tool Center Point), and system zero points are incorporated with the robot’s kinematics, auxiliary axis, and positioners.

The result is a digital start model that the programmer loads into FASTSUITE Edition 2 at the beginning of each OLP task, together with the corresponding device and component. 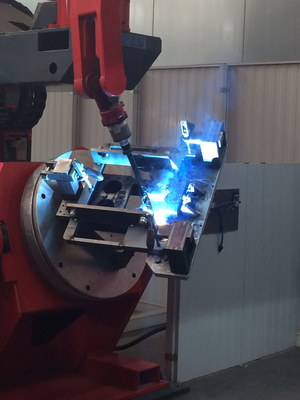 At the customer’s site, Phase 3 begins with the calibration of the facility with the digital model. The FASTSUITE team verifies the real reference points and TCP location by measuring the tip on the robot and correcting the values accordingly in the software. After acceptance and handover of the OLP-capable system, the user training takes place on site. 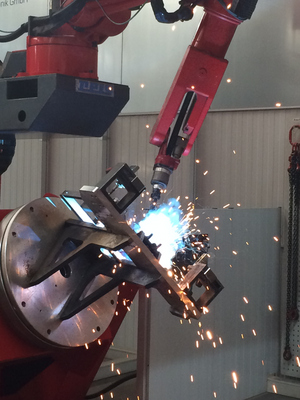 Calibration is an important milestone in OLP projects and the detailed knowledge of the CENIT application consultants has also proved its worth.

There was a high level of commitment on the part of Crown in the entire implementation project, reports Florian Braun. "We knew we needed to get involved. To do nothing was not an option". In case of problems, the FASTSUITE team was there: "When you needed them, they were there and stayed until it worked."

With this spirit, Crown has achieved a great deal in terms of robot welding efficiency. Instead of taking several days, programming a new workpiece or part variant now only takes a few hours. This is because the programming takes place in the simulation environment of FASTSUITE Edition 2 (offline, i. e. parallel to the productive operation of the system) and as a result the downtimes of the system have been significantly reduced. The production interruptions for setting up and teaching new components has been reduced to a minimum. The welding quality of the solid steel parts is consistently very good and corresponds to Crown’s standards.

In summary, the OLP project has had a positive impact on streamlining the development and design of toolmaking. It is much faster and easier to determine the right fixture because the simulated system is available with all kinematics and peripherals as a virtual 3D model. Instead of testing the real device prototypes over and over again, the virtual device can first be tested for accessibility and then built in real life. New components can be optimized during development for later welding production.

The success of the project was largely due to the fact that Crown involved all necessary team members’ right from the start. This included welding specialists, robot programmers, work preparation and production planners, production process management, all the way to plant manager Andreasen.

Everyone on the Crown team are behind the new solution and use the capabilities of offline programming. Significant improvements in productivity, quality, and overall work efficiency have been achieved! The effort and investment was worthwhile in every respect, Andreasen reports: "The OLP project is of course good for our bottom line, but we also see that our employees are very satisfied with the end result and this is very important to us at Crown."

New ideas are already emerging in the Roding facility today. With FASTSUITE, Crown has a software solution that they can grow with, it is open and scalable and can be customized to their future needs. Together with the FASTSUITE team, this is an ideal first step for a company with a strong industries 4.0 vision.