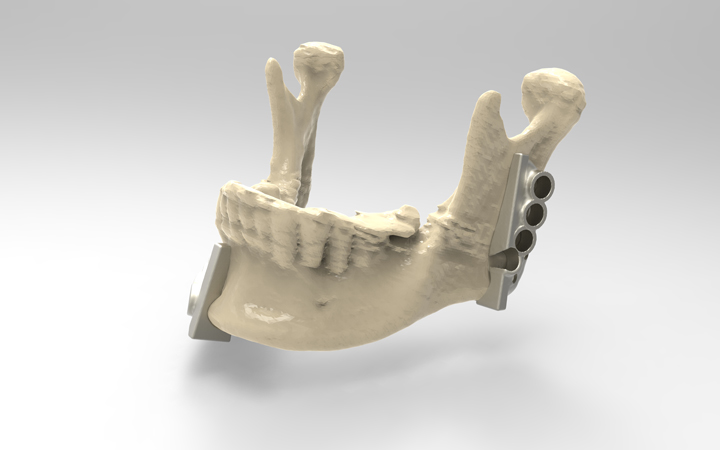 The patient, a male in his 60s, was presented to UHW as a newly diagnosed oral cancer patient needing surgery to remove the left side of his lower jaw and reconstruction using the fibula bone from one of his legs. Handling his case were maxillofacial surgeon Mr Cellan Thomas and restorative dentistry consultant Mr Liam Addy. 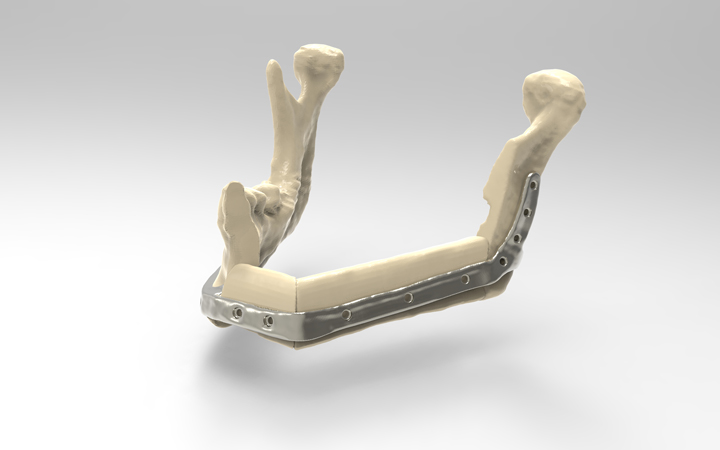 The operation would require a perfect fit between two harvested sections of fibula bone and the two remaining healthy sections of the jaw. A mandibular plate implant would be required to hold all four sections together, in order for the bone to heal and knit together.

Planning for the removal of the cancerous tissue and the reconstruction was done on a CAD/CAM suite with members of the surgical team. This team approach was integral to the success of the treatment.

Mandibular implant operations are relatively rare and complex procedures that require a large surgical team. This case would involve up to ten people in theatre.

Mr Thomas and Mr Addy wanted to control as many of the variables as possible that can arise in the environment of the operating theatre. They wanted to perform the operation with accuracy and reduce the risks that can arise from traditional freehand surgery. They chose to specify 3D printed implants, and cutting and drilling guides. They also pre-planned how they would approach the surgery.

The project broke new ground because it provided an alternative to the way a hospital would usually approach this type of surgery. Most hospitals still rely on in-house prosthetic teams manufacturing their own implants using traditional methods. Hand forming and welding complex components can run the risk of parts breaking off in mid-surgery.

UHW was unwilling to face that risk. Additive manufacturing allowed the specific and complex geometries of each component to be produced and built as single pieces.

Mr Thomas and Mr Addy chose to collaborate with a world leading design consultancy and applied research centre, the International Centre for Design and Research (PDR), based across the city at Cardiff Metropolitan University. For high precision additive manufacturing and to complete the digital workflow sequence, they selected one of the world’s leading engineering and scientific technology companies, Renishaw.

PDR received the patient’s CT scan information from UHW and imported it into Mimics® software for conversion to .stl format, before transferring the data into its preferred 3D modelling package, Freeform® Plus. Dr Eggbeer, Research Fellow at PDR, describes Freeform Plus as “digital clay”.

After Mr Thomas located the best target section of the fibula and fibula flap to harvest, PDR designed a cutting guide to help him remove, with precise control, two sections of bone and vascular connective tissue.

That control would be essential, partly to minimise the amount of bone and material extracted to prevent morbidity, but also  to harvest the best bone and soft tissue to ensure a healthy blood supply in the rebuilt jaw and so aid a fast recovery.

The guides included an innovative design-for-assembly feature by including pilot holes to be drilled at the correct position on the bone sections and remaining jaw sections to allow for the final fixation screws. These would align perfectly with the final fixing positions on the mandible implant.

Renishaw received the .stl files from PDR at its manufacturing site in nearby Miskin, just outside Cardiff. The five components were produced on Renishaw’s AM250 additive manufacturing systems.

Renishaw used the supplied .stl files to 3D print the metal components in titanium (Ti MG1), which is tested to ISO 10993 part 1.

PDR provided anatomical reference models of the fibula, the maxilla and mandible for the surgical team to practice on prior to surgery and to keep in the operating theatre for reference during the operation.

The precision-printed cutting guide fitted the fibula in only one location to remove any error and the mating face of the guide was perfectly contoured to fit the fibula bone with temporary screws holding the guide in place. Mr Thomas was able to cut away the designated sections of the fibula and flap, which were suitably vascularised to ensure a healthy blood supply when transplanted.

Pilot holes were pre-drilled into the two sections of fibula bone before removing them. Mr Thomas was aided by the cutting guide and key, which corresponded with the implant screw holes.

This stage of the operation resulted in two bone pieces cut at precisely the correct angles to build a strong joint and aid the osseointegration. When the bones were assembled to reform the mandible, there were minimal gaps between bone sections to aid good integration and recovery. With freehand work, this outcome would have been difficult to achieve.

To aid Mr Thomas in removing the damaged jaw section, the other two cutting and drilling guides were attached to the healthy part of the mandible. The flat faces of the guide helped to steer Mr Thomas’s saw, while he used the key to pre-drill pilot holes for the mandibular plate implant.

To reconstruct the jaw, the two harvested sections of fibula bone and tissue were connected to the remaining healthy jaw sections and the mandibular plate implant was fixed in place to hold the new mandible together. Some of the soft tissue portion of the free flap replaced the removed soft tissue.

The bone pieces fitted perfectly. The plate was screwed into place using screw-holes that aligned with the pre-drilled pilot holes in each of the four sections of the new jaw.

The key was designed and manufactured with a triangular aperture to help prevent the drill bits binding and allowed easy liquid transfer with the drill in position; this kept the drill cool and minimised the risk of the fibula bone overheating and becoming necrotic.

Two “push and click” features were designed and manufactured into the front and back of the mandibular plate to enable Mr Thomas to know that the bones and connective tissue had been positioned as planned.

The operation ran smoothly with no complications and the patient made a good recovery, enabling him to have restorative dental surgery with implants and bridges after the bone had knitted together. Within weeks of the operation, he was getting married and said he was delighted with the results.

This complex operation was delivered with accuracy that ensured patient safety throughout the procedure and delivered much-needed efficiencies in the operating theatre.

Ed Littlewood, Marketing Manager at Renishaw’s Medical Dental Products Division, said: “This is a great example of taking the best practices of precision engineering into hospital applications to deliver better, more predictable outcomes which benefit the patient, the hospital team and have overall cost savings.”

Dominic Eggbeer also said: “This case shows an intelligent use of additive manufacturing in the operating theatre. It shows how pre-planning saves surgery time.”

This successful operation has shown beneficial outcomes for the patient and provided another demonstration of why more surgeons are embracing 3D modelling and printing. ‘Design-for-assembly’ capabilities help safely deliver complex procedures with higher degrees of accuracy.

From the perspective of the health economist, with ten people involved in theatre, the cost savings were substantial. UHW conservatively estimated the operation was shortened by one to two hours. Considerable cost savings can be realised, which is a major benefit to the NHS. The accuracy of the reconstruction is an even greater benefit for the patient.

About Renishaw
UK-based Renishaw is a world leading engineering technologies company, supplying products used for applications as diverse as jet engine and wind turbine manufacture, through to dentistry and brain surgery. It has over 4,000 employees located in the 35 countries where it has wholly owned subsidiary operations.

For the year ended June 2016 Renishaw recorded sales of £436.6 million of which 95% was due to exports. The company’s largest markets are China, the USA, Japan and Germany.

Throughout its history Renishaw has made a significant commitment to research and development, with historically between 14 and 18% of annual sales invested in R&D and engineering. The majority of this R&D and manufacturing of the company’s products is carried out in the UK.