Jimmie Beacham is no gamer, but that didn’t stop him from hanging an Xbox console from a ceiling at work. As chief engineer for advanced manufacturing at GE Healthcare, Beacham, 43, is in charge of a futuristic laboratory in Waukesha, Wisconsin, experimenting with new ways to make things. He and his team are using the Xbox and a connected Kinect motion tracker to bring augmented reality (AR) into the factory and help workers become more efficient. “We are projecting the work instructions onto the parts and use sensors to monitor the assembly and give feedback to the operator,” Beacham says.

Specifically, the Kinect and a camera are following the worker’s movements and feeding them to a computer that stores the assembly instructions. The computer controls an overhead projector that displays the manufacturing steps on the workbench. Based on the visual and sensory feedback, the system signals the operator immediately if an error occurs or guides them to the next step. Visitors to the lab can use AR to assemble a collimator similar to those used in computed tomography scanner (watch the video below).

Beacham first encountered augmented reality — which overlays graphics and video over the physical world — a decade ago in a science magazine. But the technology was still expensive and complicated, so he filed the idea away. He next ran into it two years ago at GE Global Research in Schenectady, New York. By then, kids all over the world had been logging thousands of hours on Microsoft’s Xbox and Kinect. A young GE researcher, Matteo Bellucci, who now works for GE’s Additive business, showed the technology and its AR applications to Beacham’s team during a regular monthly technology review. “We instantly saw the value of a system that can guide you during work and collects sensory information to notice mistakes,” Beacham says. “The price also got much better. We almost ordered one right there on spot.”

The system currently at the Waukesha lab came from Light Guide System, a Detroit-area maker of augmented reality tools for industry. The first applications are focusing on guiding workers through “the critical steps where we can’t afford to make a mistake,” Beacham says. But his team has already started expanding its scope and connecting it to face recognition technology, collaborative robots, or cobots, and Predix, GE’s software platform for the Industrial Internet.

Beacham says that facial recognition will enable plant managers to ensure that workers at specific workstations have the required training. It also will automatically sign the employee into GE’s IT systems and allow him or her to start or resume the job after a break. “We’re spending almost 100,000 hours a year on logging into our IT systems at GE Healthcare alone,” Beacham says. “This saves time and money.”

Extending the AR system to cobots like Baxter or Sawyer from Rethink Robotics will allow the team in Waukesha expand the palette of tasks it covers to the “4Ds — dirty, dangerous, difficult and dull jobs,” Beacham says. “Let’s say the operator is doing assembly work. The cobot may take over and apply adhesive in a complicated pattern. When that’s done, the human jumps back in and does the next step.”

Extending the AR system to cobots like Sawyer from Rethink Robotics will allow the team in Waukesha expand the palette of tasks it covers to the “4Ds — dirty, dangerous, difficult and dull jobs,” Beacham says. Workers can easily program Sawyer by moving it around with their hands, says Greg Heinz, who leads GE Healthcare’s Automation Center of Excellence in Waukesha. Image credit: Rethink Robotics.

But there’s more. His team is planning to feed the AR’s visual information into a database and analyze it for insights with apps running on Predix. “I think the more we leverage augmented reality, the more data we can harvest out of our processes,” Beacham says. “The way the AR system works, it takes pictures as it goes. Those pictures provide data you can analyze and discover ways to further optimize your processes and insights about production that are hard to get otherwise.”

But AR is already making an impact. GE Chief Economist Marco Annuziata and Margid Abraham, executive chairman of Upskill, recently cited in Harvard Business Review a Boeing study that found that “AR improved productivity in wiring harness assembly by 25 percent.” And recently at GE Healthcare, “a warehouse worker receiving a new picklist order through AR completed the task 46 percent faster than when using the standard process, which relies on a paper list and item searches on a work station,” they wrote. “Additional cases from GE and several other firms show an average productivity improvement of 32 percent.” 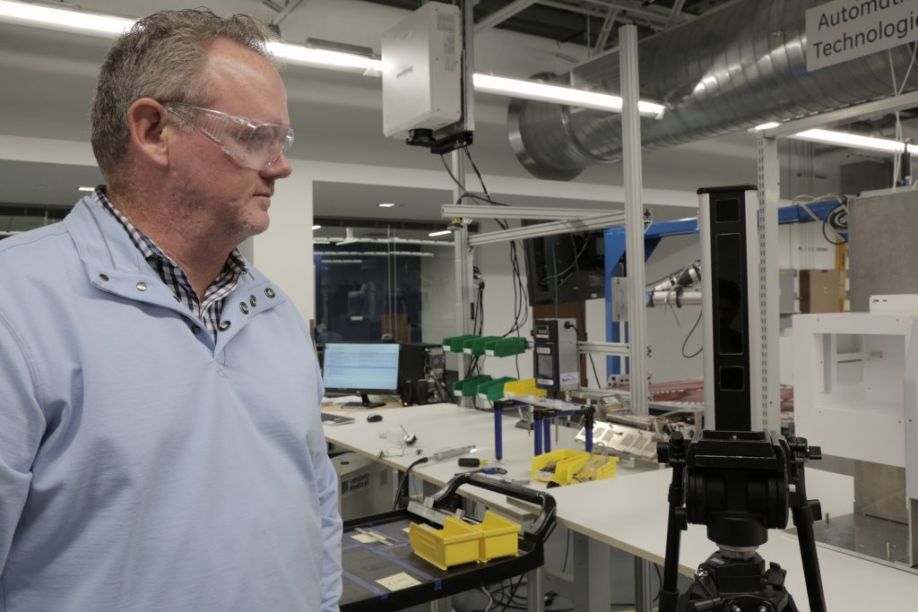 Beacham is looking at the face recognition system in the AR section of his lab. It will enable plant managers to ensure that workers at specific workstations have the required training