To understand the concept of high efficiency motors, you must first know how to calculate efficiency and the losses associated with the motor components themselves.

The final measured efficiency of a motor is calculated based only on the elements of the particular application they’re used in. For the motors themselves, without a load, manufacturers provide ratings based on standard formulas. To understand high efficiency motors you only need to know what makes them different.

But first, let’s look at the basic concept used for explaining motor efficiency, which says that efficiency is the ratio between the shaft output power and the electrical input power. Shaft output can be measured in horsepower or watts. We’ll use watts for the purposes of this article. The formula most often used is the simple one mentioned above:

Once you’ve used this formula and found your efficiency – and it’s not 100 percent – it’s time to consider the losses that occurred inside the motor. Motor efficiency drops based on a number of known factors where power is lost as current through the motor is met with a variety of resistances. These losses can include the wiring and its resistance, iron losses due to magnetic events, and thermal losses.

The electrical power that is lost in the primary rotor and in the secondary stator windings are called resistance losses (or copper losses, because they are based on the characteristics of the wire used including its diameter and length). Both primary and secondary resistance losses vary with the load in proportion to the current squared. For example:

Other losses include, iron losses, as mentioned above. These losses are the result of the amount of magnetic energy dissipated when the motor’s magnetic field is applied to the stator core. Other factors involved include mechanical losses, which involve the friction in the motor bearings and stray losses, which are basically any remaining losses that are left after the resistance, iron, and mechanical losses are calculated.

The largest culprit for stray losses are the result of harmonic energies that are generated when the motor operates under load. The load affects the shaft power output, which is why it’s impossible to discuss in a general article such as this. But basically, these losses are dissipated as currents in the windings, harmonic flux components in the iron parts, and leakage in the laminate core.

The maxon high efficiency motors get their name because they provide efficiencies in the 90 percentiles as opposed to the 50 to 60 percent range for most motors in their class. 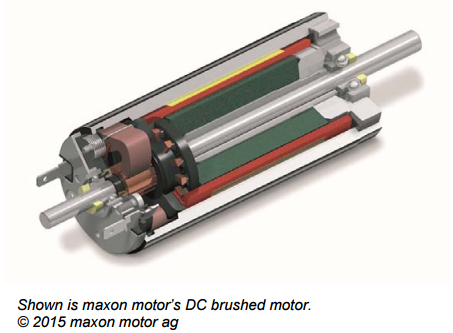 maxon incorporates the use of permanent magnets in their motors. The ironless core brush motors have a permanent magnet, then a rotating winding, and then the housing, which closes the magnetic path. With this configuration, there is no electricity going through the core of the motor (through the iron parts) to create a magnetic resonance.

The benefits of the ironless winding provides very specific advantages, which include: there is no magnetic detent and there are minimal electromagnetic interferences. Part of the efficiency, though, is dictated by the type of magnet used in the design. For example, the stronger magnets, such as NdFe will offer higher efficiencies. Add to this, the fact that maxon includes graphite brushes and ball bearings in their brushed motors, customers gain long service life as well as high efficiency.

maxon is a leading supplier of high-precision DC brush and brushless servo motors and drives. These motors range in size from 4 - 90 mm and are available up to 500 watts. We combine electric motors, gears and DC motor controls into high-precision, intelligent drive systems that can be custom-made to fit the specific needs of customer applications.

After intensive market research, maxon decided on a printer from French manufacturer 3DCeram, which has been customized to meet the company’s own requirements.

Why AGVs Can Be The Solution in Logistics

AGVs (automated guided vehicles) are essential tools in the current commercial and industrial transformation. But what challenges do they need to address?

After looking at the existing motor and the space envelope available, Sound Leisure, together with maxon engineers, selected the maxon brushless EC 45mm flat motor. This brushless DC motor is part of a program of flat motors, ideal when space is at a premium.