The most popular and widespread technology is FDM (fused deposition modeling), known also as FFF (fused filament fabrication). The majority of companies apply this technology in numerous printers, both of "amateur" and of "professional" classes.

Additive manufacturing or 3D-printing is a process of building of a 3D object by adding layer-upon-layer, in contrast to the subtractive technology.

The subtractive technology is a process of mechanical removal of the material excess from a solid workpiece.

The very first device to create a 3D-prototype was an American SLA-apparatus, which used stereolithography and was developed and patented by Charles Hull in 1986. At the same time Hull founded the 3D Systems company that produced the first device for 3D printing called Stereolithography Apparatus.

In 1990 a new method of obtaining 3D "printed impressions" ( a method of fusing) was used. It was developed by Scott Crump, the founder of the Stratasys company, and his wife. They both continued the 3D-printing technology development.

The modern historical stage of 3D-printing development started in 1993 with the foundation of the Solidscape company. It manufactured inkjet printers, precursors of the three-dimensional. In 1995 two students of the Massachusetts Institute of Technology modified an ink-jet printer.

The RepRap project was founded by Adrian Bowyer. His idea, for the first time introduced in March of 2005 in the RepRap project blog, included creation of the machine (with the open-source drawings and software), capable of replicating itself, which gave the name to the project. The Reprap-printer cannot print electronics or extruders, but it can print the basic kinematics details.

The most popular and widespread technology is FDM (fused deposition modeling), known also as FFF (fused filament fabrication). The majority of companies apply this technology in numerous printers, both of "amateur" and of "professional" classes. A polymeric filament yarn is fed to the extruder, where it melts and, when extrudes, starts forming a physical object in accordance with the sectional configuration of the CAD- virtual model.

The extruder consists of two parts: a hot-end and a cold-end. At first the printer feeds the plastic filament thread to the heating zone to melt it. The plastic coils themselves are outside the extruder, namely at the cold end. Typically, the cold end consists of a stepper motor and a pressure roller pushing the thread to the heating zone. This arrangement is called direct. Now let’s turn to the second part of the extruder: the hot end, where thread melting and its extrusion to the platform are provided. The most important parts in the construction are a heating element, a temperature control sensor (thermistor), an extruder barrel, a thermal barrier, and a nozzle.

The constructive distinction between the Bowden and the Direct extruders   lies in the fact that the extruder components in the Bowden are set apart and connected by means of a long hollow Teflon tube, through which the filament is pushed from the cold-end to the hot-end, where the plastic melts and then extrudes to the platform.

Materials for a FDM printer

ABS plastic is the first most frequent type due to its low price. A suitable printing temperature depends on the polymer viscosity and is generally in the range of 210-240 °C. The thermoplastic shrinkage is 0.4-2.5%, due to which the edges of the product may spontaneously come off from the table resulting in cracking of the product. ABS is soluble in acetone, is easily glued, treated and painted. It is recommended for closed 3D printers.

PLA (polylactide) is one of the most versatile plastics for 3D-printing made from corn. It has low shrinkage of 0.2-0.5% and excellent interlayer adhesion. The printing temperature is 175-210 ° C. It is soluble in dichloroethane and dichloromethane. It is harder to process than ABS because of its relatively high hardness. It has a very low softening point (about 60 ° C) and may eventually decompose by the environmental effect. It’s a bit more expensive than ABS.

Nylon (polyamide) has good strength characteristics, high durability, good resistant strain, excellent interlayer adhesion. The finished products are able to stand the temperatures from -60 ° C to + 120 ° C. Nylon requires a heated table for effective printing, as its degree of shrinkage  is  1.2-2%. The printing temperature depends on the polyamide type and may range from 225 to 265 ° C. Better to use it in closed 3D printers.

FLEX  is a classical flexible material. It is very sensitive to the surface. Delamination is extremely low due to the high flexibility of the material. It has good interlayer adhesion. It is highly hygroscopic and must be kept in closed packages with hydrogel. The printing temperature is 220-240 ° C.

HIPS is high-impact polystyrene with high impact resistance and plasticity. Unlike ABS, HIPS is soluble in limonene (organic acid). This makes it possible to combine ABS and HIPS, using polystyrene as the material for support.  It can be removed after printing by simply dipping the product in limonene; no need to resort to mechanical cleaning. The printing temperature is 230-240 ° C ; the shrinkage is 0.8%.

PVA is one more support material. PVA is soluble in water, which makes it completely unsuitable for building long-life products, but it can be used as a support material for printing models of complex geometric shapes. The recommended extrusion temperature is 160-175 ° C. As a water-soluble material it is hygroscopic (readily absorbs moisture), which should be considered when storing.

Before you print any model on a 3D-printer it is necessary to convert the format of a polygonal model (.stl) into the program for the printer to print layer-upon-layer. FDM printers use most commonly G-code, the programming language used by CNC machines (a 3D-printer is just one of them). The software to perform this conversion is called Slicer; it is often built into the 3D model visualizer. It allows seeing before printing how the model is placed on the table, allows building supports and selecting print settings: layer, speed, filling, air cooling, and others.

It exists in two versions – paid and free. It’s a well thought out support generation. Unfortunately, it is not compatible with every 3D printer. 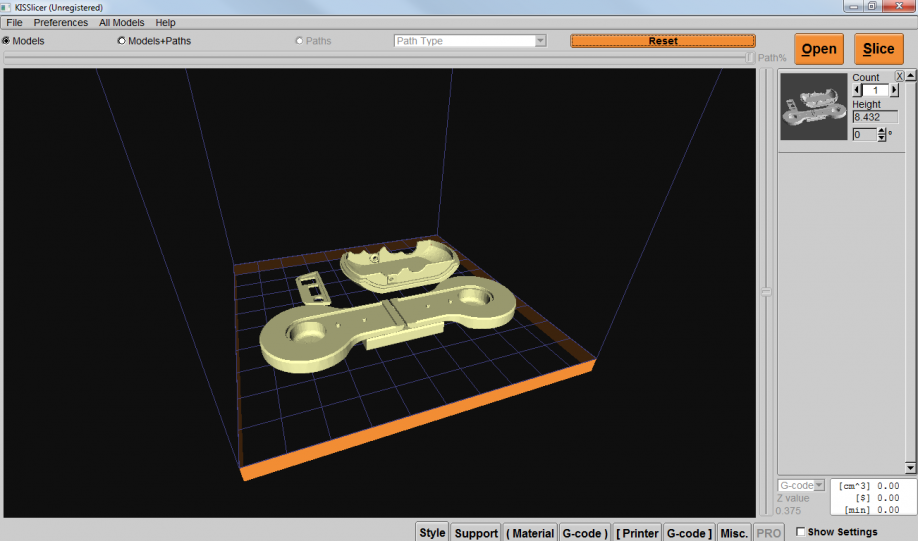 A handy tool that is suitable for almost all printers and is clear to beginners in 3D-printing. It is free, and is being constantly improved. 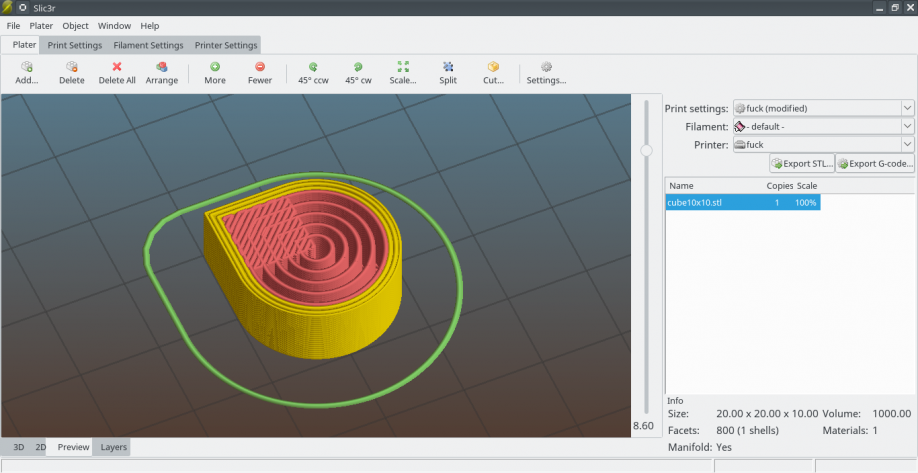 This is a free 3D printing solution for managing and sharing your 3D prints from the well-known manufacturer of Makerbot printers. It contains Skeinforge and Slic3r slicers, providing some choice for 3D-printing. A user-friendly interface, with direct access from the program to the online library of Thingiverse models. Its settings are not very  flexible, because it was originally designed for its own printers. 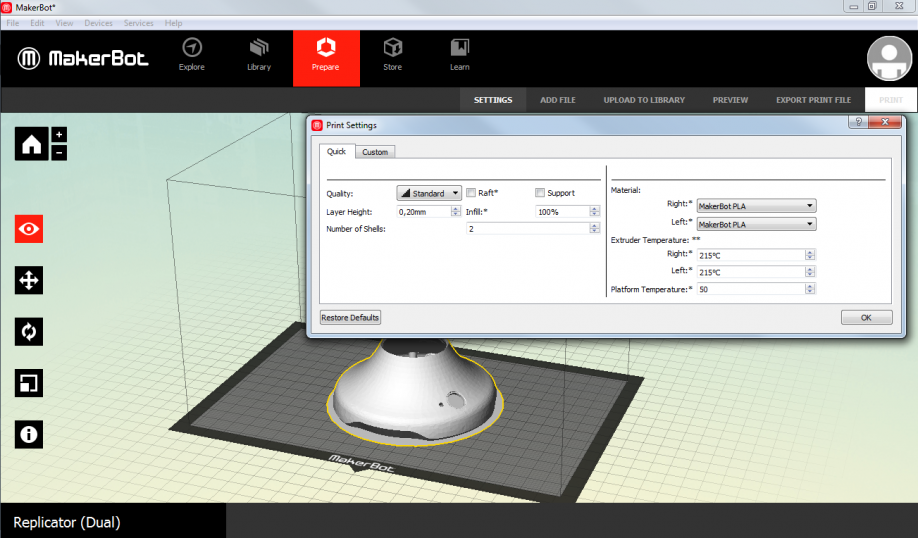 Repetier-Host has a large number of settings and comes with a variety of Prusa. You can use the Repetier-Server software for remote printer management. It provides a layered preview. 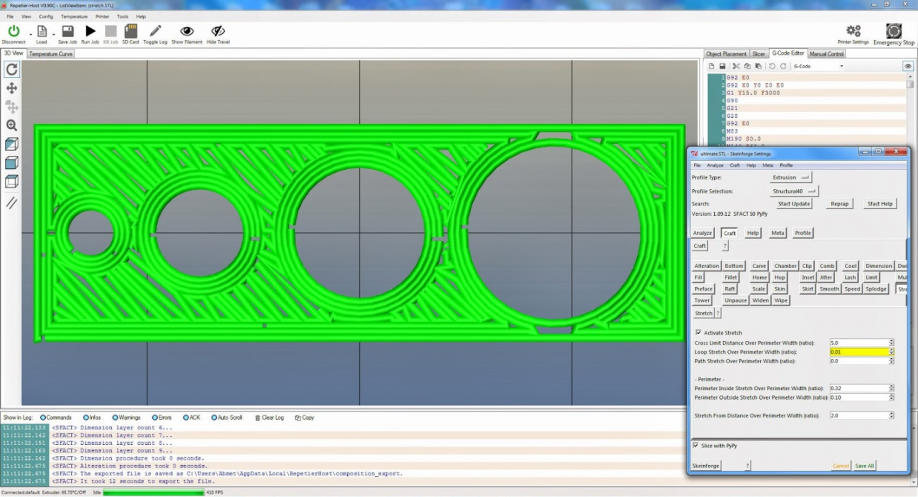 This is perhaps the most widely used slicer. Developed by the specialists of Ultimaker, it is free and is compatible with a large number of printers, including reprap ones. The supports generation is very original, but effective. It has a layered preview, automatic calculation of material consumption, model weight, printing time.