The future of robotics contains the same level of certainty as the suns rising in the morning. Robots are becoming an integrated portion of the workforce, and they will be there every day thereafter, unless a company ditches robotics altogether. 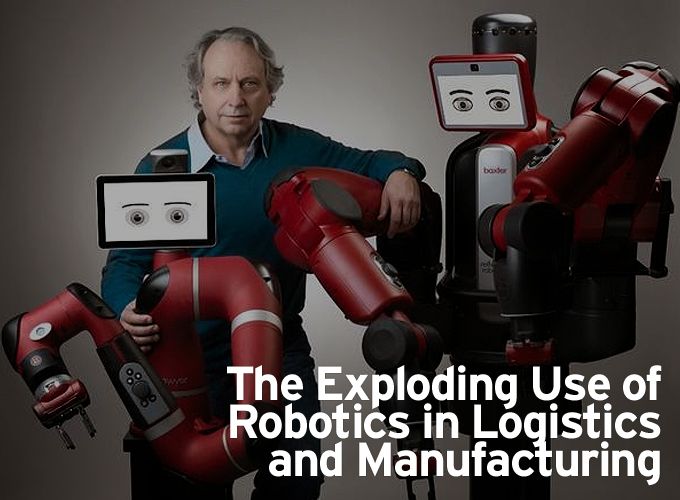 Reprinted with permission from Cerasis.

The world has changed from the oil days of machine assisted assembly lines and manufacturing processes as more robots have entered the workforce. Robotics is not just a way to help companies, but many manufacturers have recognized how robots can improve their supply chain processes, benefit the company, and drive their future success. Rethink Robotics introduced Sawyer in 2015 and pioneered the "friendly" robot game with the introduction of Baxter in 2012, which will make the integration of human workers and robots seamless. Amazon Robotics, also known as Kiva Systems, hosted a competition earlier this month to locate the best order fulfillment robots available. With major companies taking the initiative to develop and encourage the growth of robotics in logistics and manufacturing industries, the possibilities for the future are endless. However, you need to know what’s driving the mass expansion of robotics, how robotics benefit companies, and a glimpse of what it means for your company in the future. Only then, will you be able to appreciate how robotic applications are changing our world.

Driving Forces Behind Robotics in Logistics in Manufacturing

As society experiences more demand for rapid order fulfillment and accuracy in supply chain processes, manufacturers and supply chain management providers must come up with a way to meet consumer demands. Meanwhile, the number of drivers has dwindled over the past few years, labor unions have demanded higher wages and fewer hours, and other companies simply do not have the money to spend on hiring additional workers. Therefore, many companies have had to think of alternative ways to get the same amount, if not substantially more, of work completed in a shorter period of time. Robotics holds the answer to this problem.

Robotics also answers a second question of those involved in the supply chain: how will the company improve efficiency and save money? When a company needs to achieve dynamic scalability, the company needs a workforce capable of adapting to the changing environment. Previously, we have discussed the uncertain futures of manufacturing if the TPP, or TPA, is authorized and passed. Additionally, manufacturers must convince the public of the need for more workers in the industry, especially as many other occupations appear to be drawing more workers than manufacturing. However, robotics could eliminate any of these manufacturer concerns as the technologies become more widely used, affordable, and available.

Ultimately, the driving force behind the expansion of robotics in logistics and manufacturing processes is the consumer. Consumers want their products, which they have paid for, and faster, more efficient processes, from the manufacturing to delivery, will encourage repeat purchases, and therefore, company growth and success. Without the consumer demand, the demand for robotics would not exist.

Benefits of Robotics in Logistics and Manufacturing

While it does not need to be stated, you must remember that robots are not people. Robots do not have emotions. Robots do need sleep. Although, some may argue robotic programs have life-like responses to our needs.

Robots have the potential to create a limitless workforce that does not have additional expenses on a company. For example, retirement benefits, paid-time-off, overtime pay, adherence to daily work schedules, and other aspects of typical workers is completely eliminated when robotics are employed in supply chain processes.

Robotics also impact the efficiency and analysis of supply chain processes. Robotics can sort through incoming and outgoing packages faster, place them on the appropriate shelves, or shipping containers, and ensure the packages do not have any defects, which would cause unnecessary returns or delays in the order fulfillment process. Robots may also detect issues arising around them. For example, robotics could be used to prevent a truckload of merchandise leaving the warehouse if a wreck has occurred several miles away. Alternatively, robotics could provide the drivers with an alternative route prior to leaving. This may sound nearly identical the use of the IoT in supply chain processes. However, robotics would be comparable to the physical action that takes place following the identification of inefficiency. Therefore, robotics can be applied to the software aspects of supply chain processes, even though human input may still be necessary.

Robots are capable of inhuman feats, such as lifting heavy objects or reaching tiny areas. This impacts how items may be manufactured. For example, humans must create build an item from the inside out, as our tools only allow us to perform certain actions. Alternatively, a robot could use a tool of much larger reach and smaller grasp to enter a tighter space to perform a certain action. This leads to the possibility of locating faster, more efficient ways of building a product. Furthermore, newer robots have more applications as they may be repurposed to meet the needs of the manufacturing and logistics industry. Unlike their predecessors, modern robots are typically lightweight and easier to relocate throughout a manufacturing plant or order fulfillment center. Now, consider what means for the future.

Amazon: The Leader of the Bleeding Edge of Robotics in Logistics Practice

At the ICRA 2015 conference, an international forum for robotics researchers, Amazon hosted the “Amazon Picking Challenge,” where robots from 27 entrants from around the world tried to autonomously grab items from a shelf and place them in a tub. In other words, the robots had to recognize the different shapes, colors, and sizes of the items to be picked on their own. According to an article in Quartz:

Amazon built a shelf and filled it with a range of everyday items it sells—including Oreos, Cheez-Its, spark plugs, dog treats, and of course, a few books—to test out the challengers’ picking potential…Team RBO from the Technical University of Berlin absolutely dominated the competition. Out of 12 objects encountered, RBO’s robot was able to successfully pick ten.

RBO won the competition with 148 points—along with $20,000 in prize money—while its closest competitor, a team from MIT, received 88 points.

The video below shows the RBO robot in action:

However, beyond the bleeding edge, Amazon is truly already practicing the effective use of robotics in logistics with the purchase of Kiva Systems, which was renamed to Amazon Robotics, just lat month. The purchase of Kive Systems, for $775 Million allowed the online retailer to get ready for the rush of the holidays this past year, as stated in the Wall Street Journal:

The Seattle online retailer has outfitted several U.S. warehouses with squat, orange, wheeled robots that move stocked shelves to workers, instead of having employees seek items amid long aisles of merchandise, according to people familiar with the matter.

At a 1.2-million-square-foot warehouse in Tracy, Calif., about 60 miles east of San Francisco, Amazon this summer replaced four floors of fixed shelving with the robots, the people said.

Now, “pickers” at the facility stand in one place and wait for robots to bring four-foot-by-six-foot shelving units to them, sparing them what amounted to as much as 20 miles a day of walking through the warehouse. Employees at some robot-equipped warehouses are expected to pick and scan at least 300 items an hour, compared with 100 under the old system, current and former workers said.

At the heart of the robot rollout is Amazon’s relentless drive to compete with the immediacy of shopping at brick-and-mortar retailers by improving the efficiency of its logistics. If Amazon can shrink the time it takes to sort and pack goods at its roughly 80 U.S. warehouses, it can guarantee same-day or overnight delivery for more products to more customers.

The robots could also help Amazon save $400 million to $900 million a year in so-called fulfillment costs by reducing the number of times a product is “touched,” said Janney Capital Markets analyst Shawn Milne. He estimated the robots maypare 20% to 40% from the average $3.50-to-$3.75 cost of sorting, picking and boxing an order.

Now that is some serious savings, and thus the reason more and more companies will look to implement robotics in logistics: bottom line savings and overall efficiency, which leads to a more competitive and adaptive company.

Future of Robotics in Logistics and Manufacturing

The future of robotics contains the same level of certainty as the sun’s rising in the morning. Robots are becoming an integrated portion of the workforce, and they will be there every day thereafter, unless a company ditches robotics altogether. However, this is not likely as each robotic investment is representative of long-term expense reduction, improved efficiency, and an invaluable source of information. The future of robotics will change in the coming years, and more people will face the cycle of entering a higher-level position that robots “cannot possibly hope to take over.”

Meanwhile, companies employing robotics are working to please their customers, and if you consider the typical cost of a Sawyer robot of $25,000, you are looking at the minimum annual salary for a traditional worker. Think about how this single purchase could last for decades to come. Within 40 years, a single Sawyer robot could save a company $1 million. Ignoring robotics in logistics and manufacturing is no longer an option for any entity.

Emulate3D software helps you model and test your AMHS solutions rapidly. Use Demo3D to create running models quickly, then generate videos, stills, or view the models in virtual reality at the click of a button. Sim3D enables you to carry out experimental test runs to select optimal solutions and the most robust operating strategy, and Emulate3D Controls Testing is the best way to debug your PLCs offline, and off the project's critical path. Connect to major PLCs, import CAD, and plug into HTC Vive and Oculus Rift to produce awesome models!
More Products
Feature Your Product