A European research consortium comprising Spanish, French, Italian and German universities and companies is working on the development of an unmanned robot, equipped with non-invasive advanced sensors and artificial intelligence systems, which will help manage vineyards. 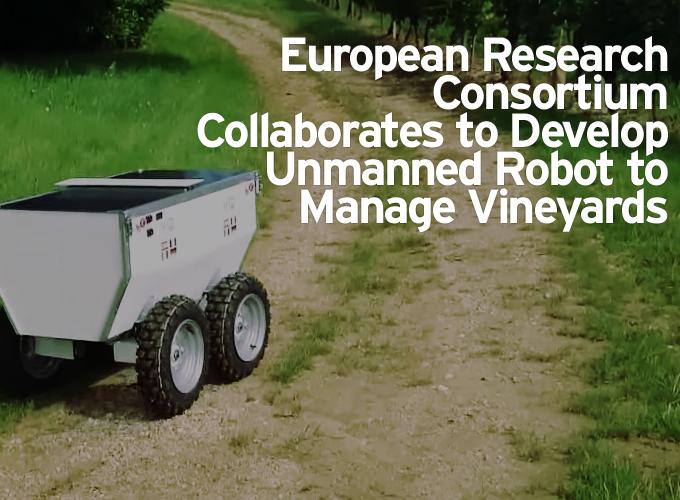 A European research consortium comprising Spanish, French, Italian and German universities and companies is working on the development of an unmanned robot, equipped with non-invasive advanced sensors and artificial intelligence systems, which will help manage vineyards.

This robot will provide reliable, fast and objective information on the state of the vineyards to grapegrowers, such as vegetative development, water status, production and grape composition.

The robot is part of the European project VineRobot, whose partners met recently at the Universitat Politècnica de València (UPV). The project, in which the Agricultural Robotics Laboratory of the UPV is taking part, is led by the Universidad de La Rioja. Completing the consortium are the Spanish company Avanzare, the French FORCE-A and Wall-YE, and the Italian Sivis, together with Les Vignerons de Buzet, a wine cellar cooperative near Bordeaux; and the Hochschule Geisenheim University (Germany).

The major advantage of this project is the availability of a large quantity of automatically obtained data, that any user will be able to interpret easily, since it is represented on simple maps; as well as the wireless transmission of the information from the smallholding.

“Robotics and precision agriculture provide producers with powerful tools in order to improve the competitiveness of their farms. Robots like the one we are developing within this project will not substitute the vine grower, but will facilitate their work, so they can avoid the hardest part in field. It has several advantages including the ability to predict grape production or its degree of ripeness in order to immediately assess its quality without touching it”, say Javier Tardaguila, project manager and researcher at the University of La Rioja, and Francisco Rovira, researcher at the Agricultural Robotics Laboratory of the UPV.

In addition, Rovira explains that a collateral effect, but positive for Europe, is the attractiveness of the application of new technologies in the field -robotics, precision agriculture and information technologies- for young farmers, “as the high average age of farmers is a recurring matter of concern in industrialised countries".

Within the project meeting held at the UPV, the researchers presented the first robot prototype on which they have been working for a year. The robot includes a basic safety circuit with many emergency switches and a bumper that stops the robot at any obstacle. The first working year has been focused on two sections: on one side, the robot’s mobility in the field, improving the suspension and traction systems in order to climb up slopes with weeds; and in the other side, the development and improvement of the different sensors that will be included in the robot.

The challenges for the next year are to give the robot the autonomy to safely drive between the vineyard lines using stereoscopic vision, integrating a side camera which will provide information about the vegetation status of the plants and possible bunches; and also the coupling of the sensors on the robot.

The project is funded with more than two million euros by the ICT-Robotics call of the 7th Framework Programme of the European Union and it will conclude at the end of 2016.