If uninterrupted conversations between cars make driving safer, then self-driving cars will become safer as well. 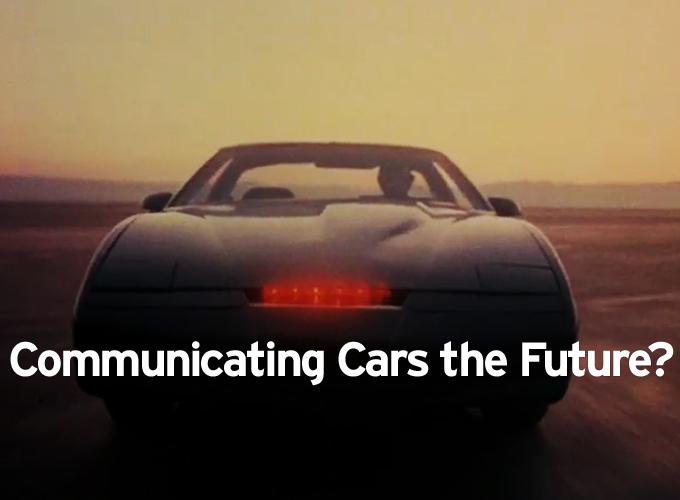 In the 1982 television series, Knight Rider, David Hasselhoff drove a customized 1982 Pontiac Trans-AM, named Kitt, which talked to him. Jump forward thirty-three years and we now have cars that talk to the driver but to each other.

The Obama administration announced that they plan to require car manufacturers to produce cars that can communicate with each other, and warn drivers to possible hazards. This could be good thing as “talking cars” could ultimately prevent tens of thousands of accidents every year.

This new technology would permit a vehicle to detect other cars and communicate with them to avoid accidents. These cars would also communicate with stop signs and traffic lights that drivers might not take notice. An alert could be a flashing message on the windshield, an audible warning, or a driver’s seat that vibrates. Some systems might even automatically brake to avoid an accident as an option.

As a result, talking cars could detect pedestrians and bicyclists who have specially equipped smart phones and make their presence known to the driver.

The National Highway Traffic Safety Administration says “V2V” (vehicle to vehicle) technology could eliminate four out of every five accidents not involving an impaired driver. Existing safety requirements focus on preventing or reducing injury in a crash with seat beats, safety glass and air bags.

In the future, vehicles will be equipped to continuously communicate over wireless networks, exchanging information on location, direction and speed 10 times a second with other similarly equipped cars that are within about 300 yards. A computer analyses the information and issues danger warnings to drivers, often before they can see the other vehicle.

Intersections are very dangerous places with over 2 million accidents and 7,000+ fatalities. A car might see a deadly crash coming even if its driver doesn’t. Future technology will send warnings to other cars if they’re destined to unexpectedly meet.

A car could detect when another car or truck equipped with the same technology was about to run a red light, even if that vehicle was out of view around a corner. This car would also know when a car several vehicles ahead in a line of traffic had made a sudden stop and send an alert even before the brake lights could be seen.

Roadways and traffic lights could talk to cars, sending warnings of traffic congestion or road hazards ahead in time for drivers to detour around the problem. The system would be important for motorcycles by constantly transmitting their location to surrounding cars, and warn the driver of a car who is about to potentially sideswipe the motorcycle.

In another scenario, a disabled vehicle could warn coming traffic to slow down to avoid hitting it. A car with this system can speak with an upcoming traffic light and adjust its velocity to time its arrival with the light’s change. In doing so it decreases idle time, which improves fuel efficiency; and how about having traffic lights notify a driver a few seconds before they change to green, helping traffic move more efficiently?

We could all but eliminate traffic if even a portion of vehicles could talk to each other, reducing inadequate driving decisions.  Even if you don't think that autonomous cars are coming, cars that talk to each other will be here very soon, helping to rid us of dangerous traffic problems.

Vehicles involved in a serious accident could automatically call traffic management controllers and emergency responders. This would allow for other traffic to detour around the accident and dispatch first responders to the scene quicker than previous methods of notification.

A typical driver, if not distracted, requires 215 milliseconds to react to a dangerous situation. That means that a car traveling at 60 miles per hour will travel about twenty feet before the driver can even respond. Safe drivers often leave several car lengths between them and the vehicle in front of them because of this delay. Receiving a warning call from another vehicle could cut the reaction time or even allow the car to stop itself.  We could jump from current collision avoidance technologies to automated breaking systems that operate using a variety of sensors by adding radio shared data.

The downside to this technology is system failure, or interference from other electromagnetic fields nearby or visa-versa. Since the system will know the location of the car at all times, will this become a privacy issue. Of course, the government will say that safety trumps privacy, so I expect this issue to find its way into the courts. Layers of security and privacy protection will be needed to ensure the information exchanged between vehicles doesn’t identify them but merely contains basic safety data.

The technology uses a radio signal to continually transmit a vehicle's position, heading, speed and other information. Similarly equipped cars and trucks would receive the same information, and their computers would alert drivers to an impending collision. But — and this is a big but — can the system be hacked or can the radio signal be interfered with by an over-riding signal to deliberately cause accidents?

Intelligent driving is energy-efficient and safe driving. Today's sensors in cars are designed to improve safety, but they have limited predictive capability. Cars that talk to each other would extend safety significantly, allowing drivers to see ahead, into areas hidden from view or around corners.

It will take many years to change the nation’s entire vehicle fleet once the manufacturers get started, but the technology could start preventing accidents long before that. Research indicates safety benefits can be seen with as few at 7% to 10% of vehicles in a given area that are similarly equipped.

If uninterrupted conversations between cars make driving safer, then self-driving cars will become safer as well. The technology represents the beginning of a new period in automotive safety in which the focus is to avoid accidents before they happen, and the best part is that the cost would only add about $100 to $200 per vehicle.

Hello Kitt, you there?