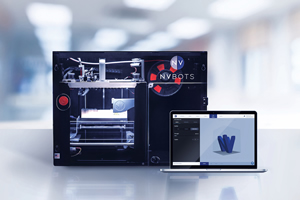 Jeff Engel for Xconomy:  Boston-area 3D printing startups have raised significant amounts of venture capital in the past couple of years. Now, they are starting to see some exits.

New Valence Robotics, a three-year-old MIT spinout that goes by NVBots, announced Thursday it was acquired by Harrison, OH-based Cincinnati Inc., a manufacturer of industrial 3D printers and other metal fabrication equipment. The purchase price wasn’t disclosed. In a press release, Cincinnati said it will retain all of NVBots’ employees, and the startup’s operations will remain in Boston “for the foreseeable future.”

NVBots has raised at least $5.3 million from investors, according to SEC filings. The company’s backers includeSwiss firm Woodman Asset Management.

NVBots was founded by MIT students who were frustrated that the 3D printers they were using lacked capabilities for remotely collaborating on the design of parts and for controlling the printer. They created a 3D printer that runs on Web-based software, enabling teams of users to configure how they want a plastic part to be made and direct the printing process from anywhere.  Full Article: