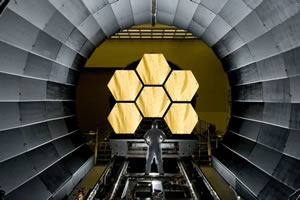 Mike Wall, SPACE.com:   Made In Space just took another step toward its goal of building telescopes and other large structures off Earth.

A 3D printer built by the California-based company churned out multiple polymer-alloy objects — the largest of which was a 33.5-inch-long (85 centimeters) beam — during a 24-day test inside a thermal vacuum chamber (TVAC) here in Silicon Valley at NASA's Ames Research Center in June.

The milestone marks the first time a 3D printer has created "extended structures" in a space-like environment, Made In Space representatives said here Thursday (Aug. 10) during a press event announcing the success of the June test. (The TVAC imposed the temperatures and vacuum of space, though standard Earth gravity remained.) [3D Printing in Space: A Photo Gallery]

"This is an important milestone, because it means that we can now adaptively and on demand manufacture things in space," said Made In Space CEO Andrew Rush. "We have significantly de-risked that technology."

Made In Space has already demonstrated zero-G printing; the company built the two 3D printers aboard the International Space Station. (NASA owns one of the machines, and Made In Space owns the other, operating it as a commercial facility.) But both of the ISS printers are kept inside the station, so they don't experience the vacuum or extreme temperature fluctuations of space.  Full Article: