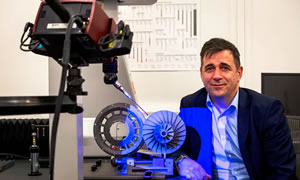 Angela Monaghan for The Guardian:  The future has already arrived in a small factory in Worcester, according to the man hired by Theresa May to put Britain at the forefront of the next industrial revolution.

But failing to crack the next revolution will come at a high price: falling living standards. The work being done in Worcester, and places like it, will be crucial if Britain is to be successful outside the EU, Maier says. The starting gun has been fired in this global race and Britain needs to get ahead.

“The beauty of it is, if we get this right, it doesn’t just drive productivity, but it also means that you’re driving jobs up the value chain, which means that people are getting better paid, so ultimately you raise living standards,” the 53-year-old says from the factory floor of Materials Solutions, which is 85% owned by Siemens and boasts big-name clients such as Rolls-Royce.  Full Article: