3D printing gets faster, with help from a vat of goo 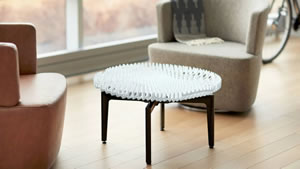 Ben Coxworth for New Atlas:  Although 3D printing may be revolutionizing the world of manufacturing, it still takes rather a long time to do when compared to some of the alternatives. A collaboration between MIT's Self-Assembly Lab, Steelcase and product designer Christophe Guberan, however, has resulted in a new technique known as Rapid Liquid Printing – it can reduce the time of some 3D print jobs from hours to minutes.

Normally, 3D-printed objects have to be built up on a platform one layer at a time. In some cases, supporting structures need to be added during the build process, which are subsequently removed and discarded.

With Rapid Liquid Printing, though, the print nozzle extrudes a polymer material directly into a container of translucent gel. That gel holds the material in place, so no supporting structures are necessary. It's sort of like being able to draw the object in mid-air, except it's in mid-gel.

Additionally, while some traditional 3D printing materials must be cured via exposure to heat or UV light, the two-part material used in Rapid Liquid Printing chemically hardens upon contact with the gel. Once the object has been printed – and its size is limited only by the size of printer and gel container – it's simply pulled out and rinsed off.  Full Article: