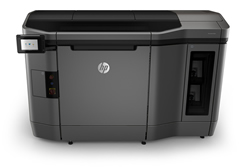 Lucas Mearian for ComputerWorld:  Hewlett-Packard today began taking orders for its first 3D printer, the HP Jet Fusion printer, which it said will be up to 10 times faster than existing machines and can cut the cost of manufacturing parts in half.

HP claims its printer will enable mass production of parts through additive manufacturing (3D printing), instead of just rapid prototyping, for which the technology  is typically used. The printers are unlikely to be used to produce millions or billions of production parts; think, instead, in terms of hundreds, thousands or tens of thousands of parts, HP said.  Cont'd...