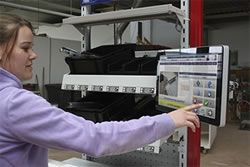 By PRW:  A leading trade body has warned that a lack of government planning was threatening the UK’s position at the forefront of Industry 4.0, also known as the fourth industrial revolution.

A number of plastics companies in the UK and on the Continent have begun to develop products and processes that take into account developments in and around Industry 4.0 – also known as the ‘Internet of Things’.

However research conducted by manufacturers’ organisation the EEF found that while 91% of companies surveyed believed that internet access was as important to their business as electricity and water supplies more than half reckoned connectivity was inadequate for the future.

While the awareness of how important the internet was to a company’s operation was seen as a positive, the EEF highlighted that poor digital connectivity may prove to become a drag on future growth.

Many companies were already having to pay a premium to ensure they had high-speed access, the trade body said.  Cont'd...