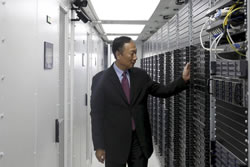 The company is looking for manufacturing sites in India. So far it hasn’t been able to settle on any in particular, Foxconn Chairman Terry Gou told a news conference in New Delhi.

“India is a big, big country. Too many places, too many states, too many cities. The choice is difficult,” he said.

Foxconn is the world’s largest contract electronics manufacturer by revenue. The Taiwanese company—known officially as Hon Hai Precision Industry Co.—is looking to tap India’s massive labor pool and has big ambitions for its Indian investments. It has long-term plans for Asia’s third-largest economy and hopes to do more in India than simply assemble smartphones and laptops. “We want to bring the whole supply chain here,” Mr. Gou said.

Analysts say Foxconn is looking to diversify its global network of factories as the company faces more competition and rising wages in China, where it has most of its manufacturing operations.  Cont'd...