Stephen Hawking fears robots could take over in 100 years 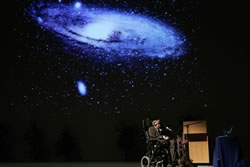 By Sharon Gaudin for ComputerWorld:  Worried that one day we'll have robot overlords? You're in good company.
Reknowned physicist, cosmologist and author of A Brief History of Time, Stephen Hawking said this week that robots, powered by artificial intelligence (A.I.), could overtake humans in the next 100 years.
Speaking at the Zeitgeist conference in London, Hawking said: "Computers will overtake humans with AI at some within the next 100 years. When that happens, we need to make sure the computers have goals aligned with ours," according to a report in Geek.
This isn't the first time Hawking has spoken about the threat that comes along with machine learning, A.I. and robotics.
In December, Hawking said, "the development of full artificial intelligence could spell the end of the human race."
More Additive & 3D Printing Stories | Articles | News