Automobile manufacturing as we know it is failing; can microfactories be the answer to how we make the mobility products of the future? 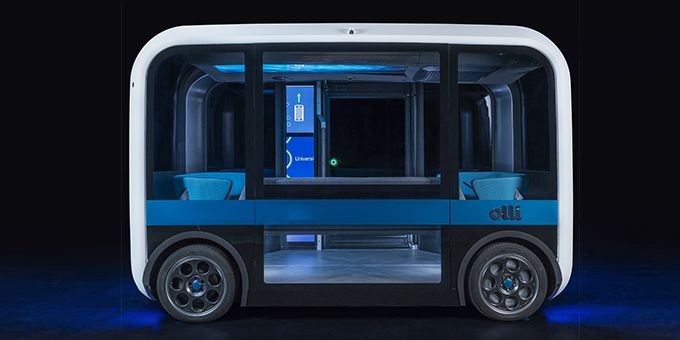 Building Cars in the 21st Century

The writing has been on the wall for years and now the headlines are clear: the automotive industry is crumbling. Fewer and fewer people are getting their drivers licenses and analysts say global car sales will decrease by 3% this year. The decline has already taken 0.2% off the global gross domestic product. In the U.K., commercial vehicle exports fell by 89% in April alone. And, in the last six months, more than 38,000 people have lost jobs at automotive manufacturers. Ford is cutting 7,000 people and closing its Welsch factory (another 1,700 jobs gone), Jaguar Land Rover is slashing 4,500 positions, and GM offered voluntary buyouts for 18,000 salaried workers and closed five North American factories.

These companies are founded on a system unchanged since Henry Ford invented it in 1913: a series of mass manufacturing processes built for economy-of-scale and repetition. This business model has finally shown its years and is struggling to keep up in today’s world. Consumers want customization, sustainability, upgradability, and a level of speed that cannot be achieved when products are rolled out by the hundreds of thousands, or even millions. Mass manufacturing only works on a massive scale - the time, capital, and resource investments are so vast, only major sales can support the system. It’s slow, wasteful, and ineffective. By the time a new vehicle hits the road, consumers are ready for something else. This, combined with unstable geopolitics, fluctuating supply chains, and increasing prices, have led to the current “peak car” environment with a saturated market and lagging consumer demand.

If this sounds familiar, it’s because we’ve been here before. In 2008, big automakers, or OEMs, secured huge government bailouts and subsidies on new cars. The U.K. initiated scrappage schemes in 2009 to support the replacement of 300,000 cars. The U.S. government spent $80.7 billion in a six-year bailout when mass producers couldn’t handle a market downturn. Yet here we are. We don’t need to salvage the auto industry again. We need to fundamentally reinvent it.

The automotive “factory” of the future

So, how do we improve automotive manufacturing? To answer that, we need to focus on what consumers want: customization, sustainability, upgradability, and a seat at the table. The good news is there is a process that already exists which can achieve those desires: localized “microfactories” with smaller carbon footprints, safe from swinging political pendulums, and agile enough to respond to market changes quickly with minimal retooling, staying ahead of the curve and delivering the best customer experience at all times. Using consumer-centered design and modern technology such as 3D printing, microfactories are capable of making fully customizable vehicles out of recyclable materials while promoting drastically less waste with small scale, agile production.

Microfactories are the first and only manufacturing method to meet today’s consumer, economic, and environmental needs, and they have finally reached the efficiency to replace mass production and challenge established automakers. Here’s how it’s done and why it will win.

“Ignore the world when you make your product and the world will ignore your product” rings true now. However, large-scale automakers have historically ignored open-design because only a few could produce cars. The connection between user and company was nonexistent; a product was designed and it was expected that people would buy it. With microfactories, customers’ wants and needs are considered first, then products are manufactured to meet them.

Open-design or co-creation brings people together on one platform to envision the future. Communities understand their mobility needs better than anyone. Vehicles intended for coastal climates have different requirements than those in Arctic conditions. Local people understand the difference better than an executive in an ivory tower. Co-creation uses the power of the internet to understand consumer needs and ensure manufacturers are meeting them.

Once people agree upon what they want, and global design experts ensure it can be built, a digital file is directly uploaded to the 3D printer at the heart of the microfactory and printing and milling begin. Right now, the world’s largest 3D printer is a 10-by-40-foot behemoth capable of printing the entire body of cars, shuttles, boats, etc. in one or two pieces. Surrounding it are a handful of programmers and quality-control experts, inputting design changes when necessary. What it prints is up to the consumers, what it is made out of has been years in the making.

Currently, cars are made up of many steel and aluminum parts which rust and corrode in the elements. Chosen for strength, these materials are heavy, require frequent maintenance, and aren’t easily recyclable. 3D printers opened the door to a host of new material possibilities. Chemical engineers have created polymer libraries of over 100,000 composite options to print with depending on the characteristics needed for the vehicle at hand: strength, weight, flexibility, thermal and electrical conductivity, etc., without sacrificing safety.

The world’s first 3D printed car, the Strati, printed in 2014, drew on this library of carbon-based polymers to produce a body and chassis made up of 80% ABS plastic and 20% carbon fiber that weighed less than 500 pounds. Once the drivetrain, wheels, and brakes were added, the finished vehicle contained fewer than 40 components, compared with as many as 30,000 for a typical compact sedan. And the process has only improved.

Olli, an 8-person, autonomous shuttle, was the next 3D printed vehicle to come from microfactories. Its entire chassis and body are printed in less than a day - half the time it takes to assemble its mass-produced counterparts. As important as its quick production, Olli’s low-volume (only build what is ordered), one-at-a-time manufacturing process means it can be customized without extending production schedules and without massive surpluses or parking lots of idle vehicles with bows. Once the shuttle is in customers’ hands, updates can be made as often as needed, eliminating the billion-dollar retooling and remodeling efforts undertaken nearly every five years by OEMs to improve aging vehicle lines.

It only took nine months for Olli to go from design to road testing in 2016, and it costs less than $6 million in total. This was a milestone in the history of car making. Compare Olli’s launch to BMW’s 8 series: the company invested $2.6 billion dollars in the car which went on sale in 1989 and was pulled a decade later after only 30,000 sales.

Today: Micro vs. Mass by the numbers

Let’s look at a current example: Daimler AG’s Sindelfingen Plant produces its flagship Mercedes-Benz S Class, and other models, at a clip of about 300,000 units per year. This is achieved by more than 37,000 workers toiling across 14 million square feet (1.3 million square meters). It takes Daimler five to seven years to develop a new vehicle. 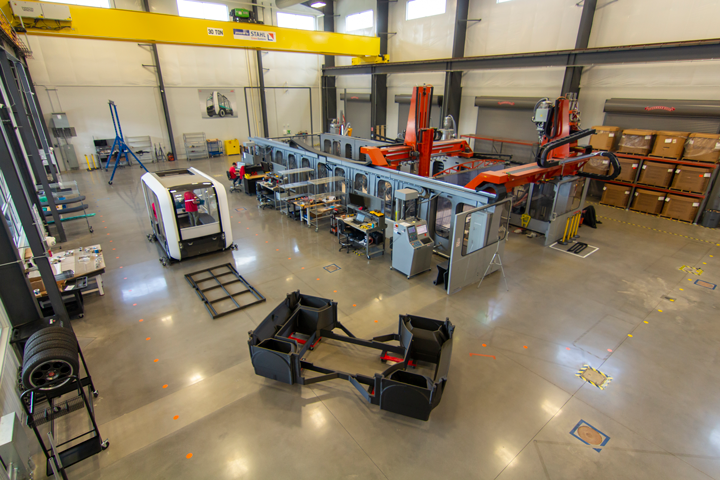 Olli 2.0 is being produced in Knoxville, Tennessee, at a microfactory whose production lines each total 10,000 sqft. It took six and a half months to go from design to complete testing (including crash and demonstration). It has taken five-and-a-half months from transition charter to the start of production (scheduled for July 1, 2019). That’s a total of 12 months to develop a new vehicle, and current projections show this will decrease to ten months for the next version. It’s estimated that the microfactory will make a total of 222 Ollis per year with less than 20 people by 2020 and this can already be seen to increase to 350 units per year. 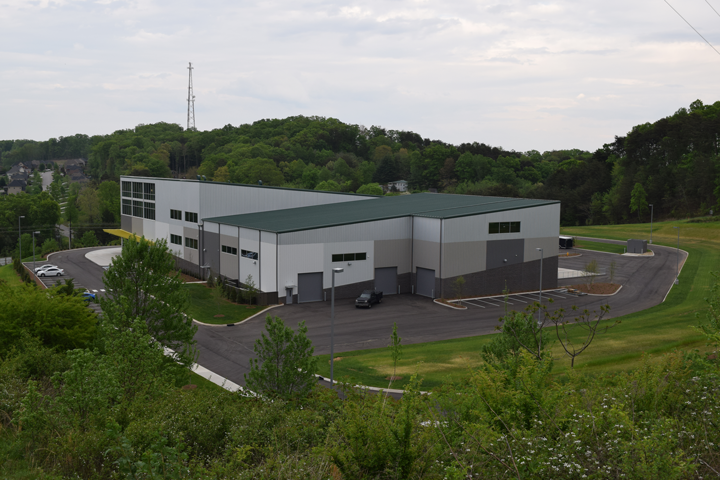 This means that microfactories have a method in place to exceed mass OEM production numbers per year (222 per 10,000 sqft vs 214 in 10,000 sqft), with 25% fewer people (20 per 10,000 sqft vs 26 per 10,000 sqft) and fewer resources when executing on the same square footage. With fundamentally more flexible development and a faster upgrade cycle (12 months vs. 5-7 years), microfactories’ co-creation and digital manufacturing systems are primed to beat out OEMs. Furthermore, each 10,000 sqft cell in a MicroFactory can produce a different model profitably or can be massed to make more of the same popular model. This is perhaps the greatest benefit in our reality of divergent consumer preferences.

It’s important to note that the Knoxville microfactory won’t be operating at full speed until early 2020 and there aren’t yet enough microfactories to take on the global scale of traditional OEMs. That said, microfactories are increasing in efficiency year-over-year while the OEMs are already operating at “optimized” states - they can’t improve mass production efficiencies. They’re stuck. Microfactories are on a classic disruptive innovation curve and are poised to accelerate.

With time, microfactories will overtake mass manufacturing from economic and production standpoints. They’ll also greatly improve our communities and our planet. They’re built to meet the needs of the place they’re in -  from the products they produce to the people employed there. And as a sustainable alternative to today’s manufacturing plants, microfactories are set to help answer the increasingly dire environmental problems of our time.

Large automakers are failing. It will be exciting to watch microfactories rise to the occasion.

Determining if a Digital Twin is right for your Manufacturing Operation