The Tesla factory in Fremont, California, and the Gigafactory in Nevada are monuments to science and progress. 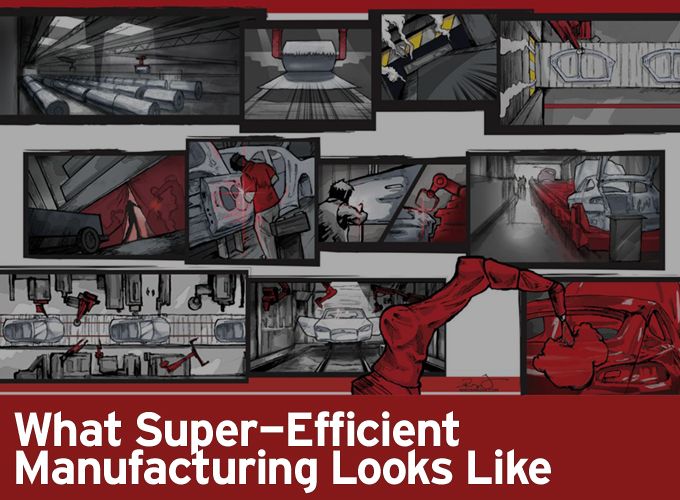 Manufacturing is a significant force in both advanced and developing economies. But manufacturing has changed, bringing new opportunities and challenges to business leaders and policy makers. As an innovative company Tesla has pulled out all of the stops to make their facility an economic success.

In developing economies, manufacturing provides a pathway from subsistence agriculture to rising incomes and living standards. In the more advanced economies, it remains a vibrant source of innovation and competitiveness, in research and development, exports, and productivity growth.

Manufacturing is now entering an exciting new phase, as it continues to grow globally and contribute to about 16% of the global GDP. Innovations in materials and processes—from nanomaterials to 3-D printing to advanced robotics—promises to create additional demand and increase productivity gains across all manufacturing industries.

There are estimates that 40-50% of equipment in factories will have to be upgraded over the next decade, as large corporations work toward a new industrial revolution called “Industry 4.0”, which is a term that refers to the integration of sensors into factories. Below are the four phases of manufacturing since the early 20th century.

One example of "Industry 4.0" is smart robots that turn sheet metal into auto bodies. While traditional auto manufacturing robots are programmed to pick up sheet metal and then weld it, robots in the very near future will be able to scan the surface of the metal, detect defective pieces and then reject them, saving companies money. This requires sensor abilities in equipment.

The Tesla Factory in Fremont, California is one of the world’s most advanced automotive factories, containing 5.3 million square feet of manufacturing and office space. In fact, it may be the most efficient factory in any industry. 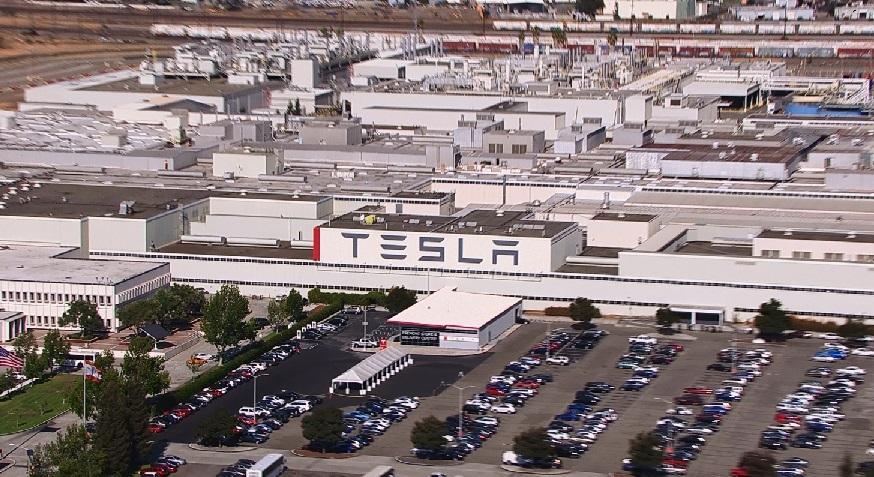 Both the Tesla auto production plant in California and the battery plant in Nevada are painted entirely white inside so that the facility looks more like a laboratory than a production facility, but the color also brightens the entire plant. 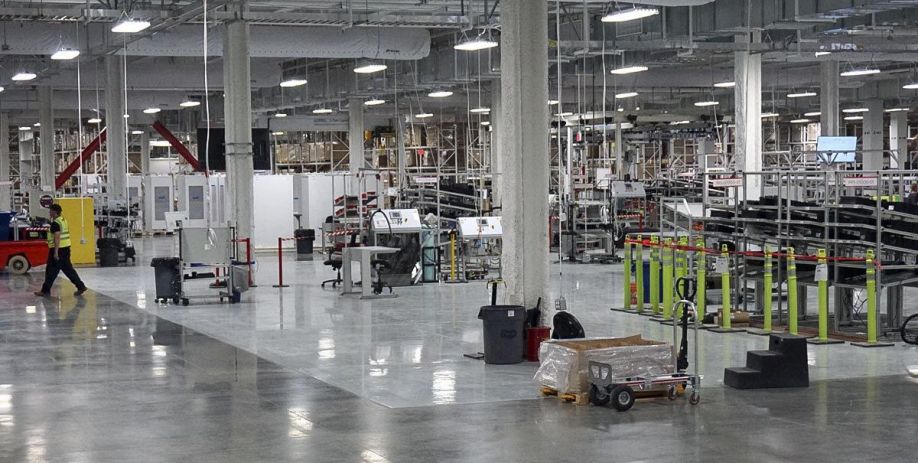 One room in the auto plant is filled with huge metal tanks. It looks like a very, very large industrial kitchen. This is where the raw materials are mixed together. In other rooms, the fully formed pieces of the battery, called the anode and cathode, are baked in huge oven-like machines that are several hundred feet long. Robots handle the car’s giant battery pack, which weighs 1,300 pounds.

In another area, the production process starts with 20,000 pound rolls of aluminum that are eventually shaped into body panels for the Tesla vehicles. 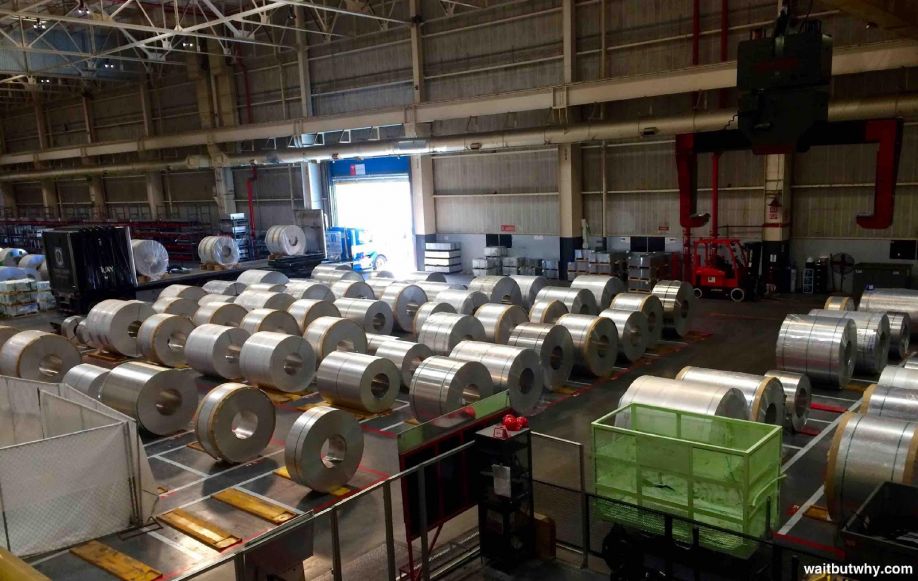 It's packed with giant robots that can lift, rivet, and weld the car. Tesla uses robots made by the German robotics maker Kuka. The industrial robots are capable of lifting more than 2,000 pounds. Tesla makes many of its components on site, including its signature 17-inch dashboard screen.

At Tesla, it is critical to build as much as possible completely by robots.  The Tesla cars are designed to be built with millimeter accuracy and to stay in tolerance by measuring them constantly so they never manufacture something out of specification. 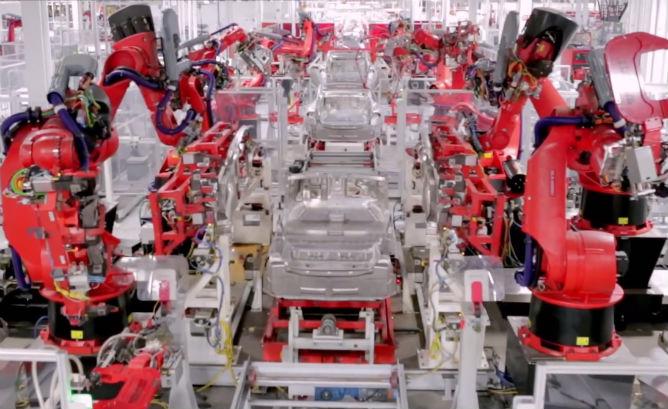 Telsa is learning to build everything themselves from scratch. The company rarely buys pre-assembled components, which allows them to generate a supply chain for their own high quality components.

Tesla has managed to figure out how to assemble large objects from smaller objects with the same strength as the large objects.  Tesla uses a mixing welding technique, which the company pioneered that enables them to take smaller sheets of materials from which they build larger objects. 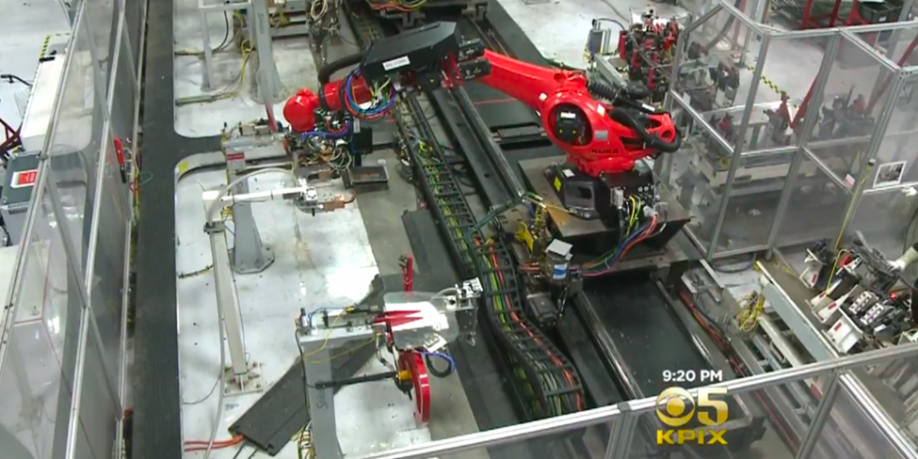 The Tesla car factory has a giant press, which costs $50 million and presses metal with 4,500 tons of pressure. 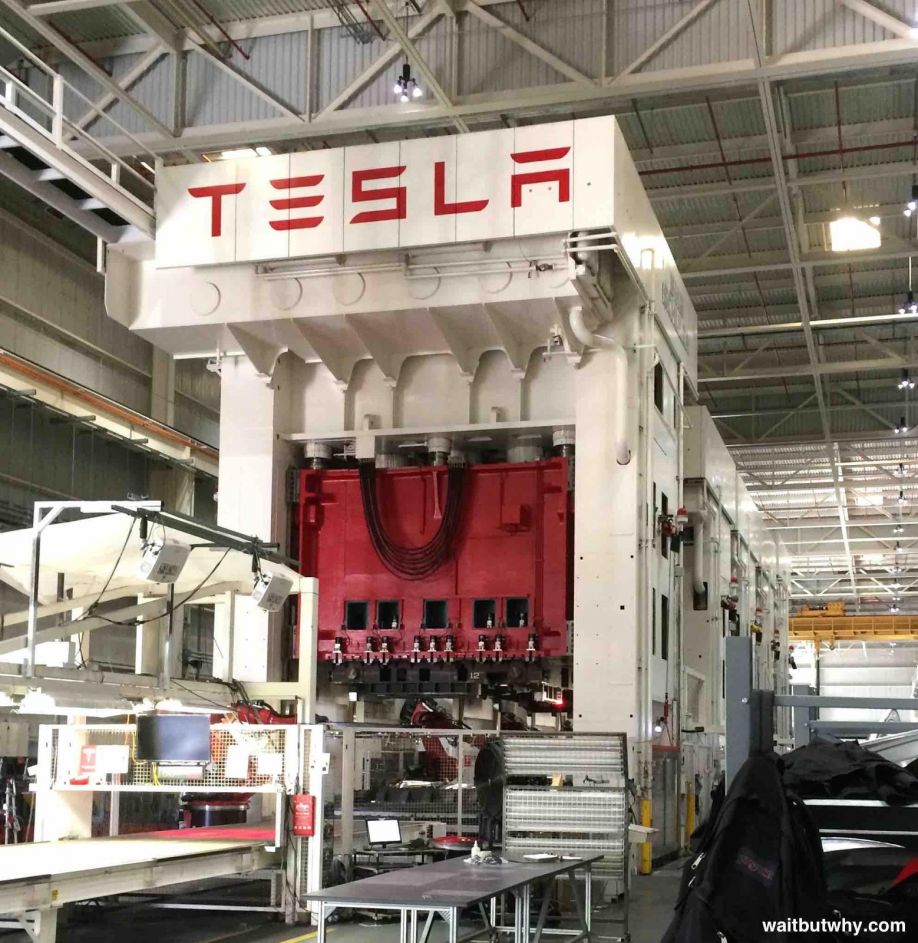 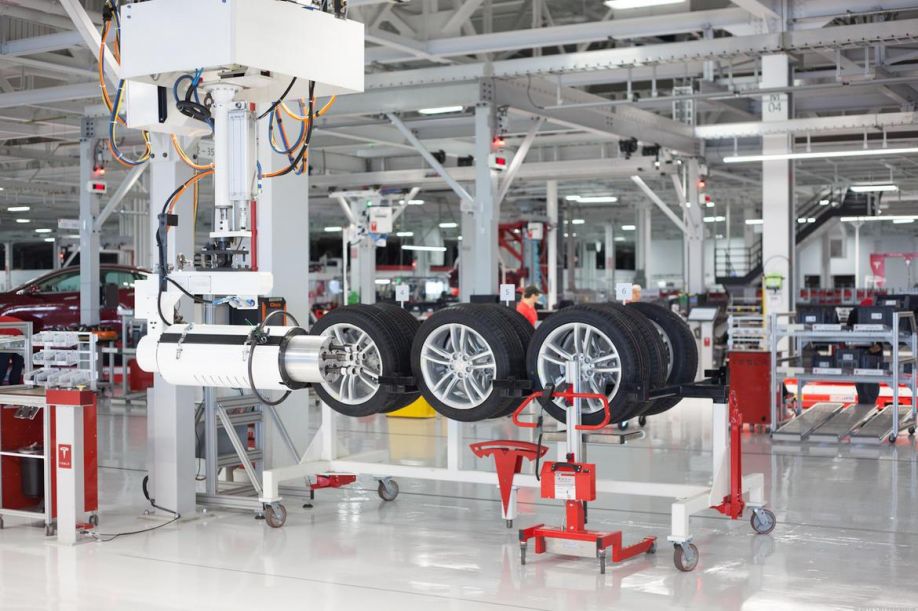 Note how clean the production floor is 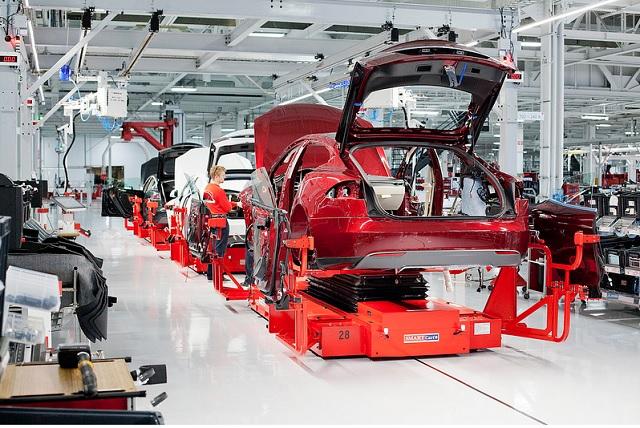 Unlike most factories, the engineers doing white collar jobs and the technicians doing blue collar jobs are located in the same working area so they can work directly with each other and give their counterpart feedback. Tesla developed a really new concept whereas those who design the machines should be near them as they are being manufactured.

While in a traditional factory environment, it wouldn’t be an ideal situation for an engineer on a computer; and a traditional office environment wouldn’t be an idyllic workplace for a technician; whereas, a futuristic laboratory feel is just right for both professions. There are almost no closed offices in either factory—everyone is out in the open, exposed to everyone else.

In the design office, Tesla designers have a 3D printer that could quickly “print” a small version of a sketched Tesla design so a designer could actually hold their design and look at it from different angles.

There are several reasons why Tesla robots are designed to be autonomous. The cost of a human employee dramatically increases costs by as much as a factor of ten. Autonomous robots have the aptitude to acquire information about their environments, and work for an extended period of time without human intervention. These self-reliant robots can work throughout the manufacturing operation without human assistance, and they are able to avoid situations that are harmful to themselves or people and property.  Autonomous robots are also able to adjust to changing environs.

As a maker of emission-free electric cars, Tesla cares about energy efficiency and carbon footprints; therefore, the company added windows and skylights at its Fremont factory to benefit from natural daylight. 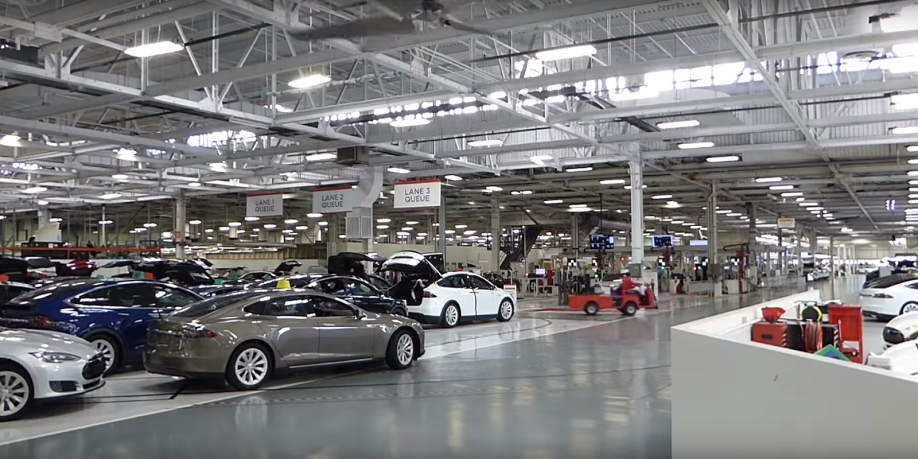 An important part of the electric car is the battery. Tesla is addressing this issue with its Gigafactory in Nevada.  Along with the car battery, the factory will be producing batteries for home and industrial use to store energy.

The production line at Tesla's Gigafactory is already in operation, manufacturing the Powerwall, a battery designed to store electricity from solar panels in average homes.

The Tesla facility is loaded with state-of-the-art robots, which help lift, turn, weld and assemble the aluminum occupant cell and body to extremely high tolerances. The process is smooth, efficient, and packed with robots.

Just in case you wondered about the name—Giga. It is a unit of measurement that represents billions. One GWh is the equivalent of generating or consuming one billion watts for one hour—one million times that of one kWh.

The equipment in the factory will double the world's capacity to make lithium-ion batteries. Tesla hopes to produce 35 gigawatt-hours of energy storage annually, which could supply 500,000 of its electric cars. 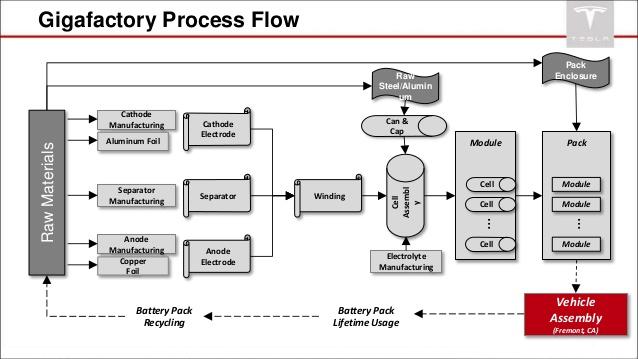 One room over part of the factory is running, but it's making something that’s not for their car. It’s the flat battery, Powerwall, which is about 4 feet tall and 3 feet wide This battery is designed for use in homes. If a house has solar on its roof and a Powerwall is installed, surplus solar energy can be stored. 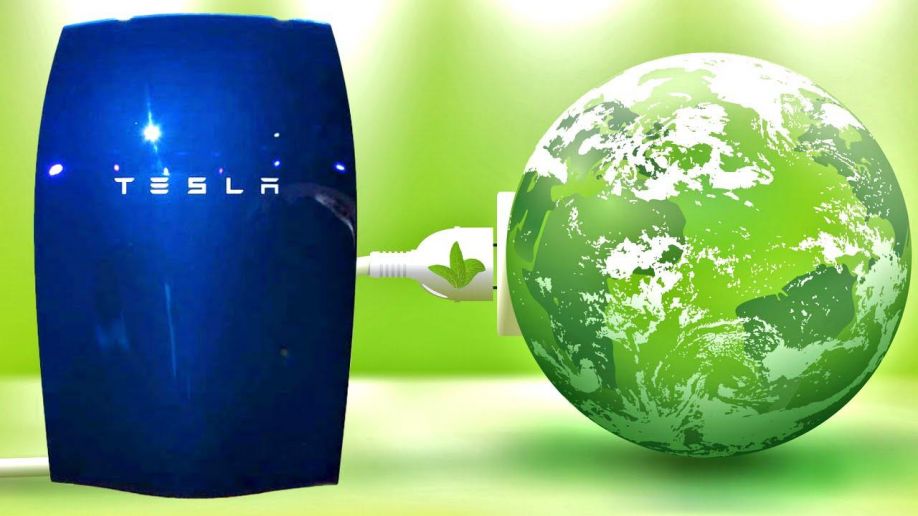 The Tesla factory in Fremont, California, and the Gigafactory in Nevada are monuments to science and progress. Just like Edison and Einstein challenged deeply entrenched beliefs, Elon Musk is a leader of 21st Century innovation. Musk was one of the first to truly comprehend how emerging developments, especially that robotics is the future of manufacturing. 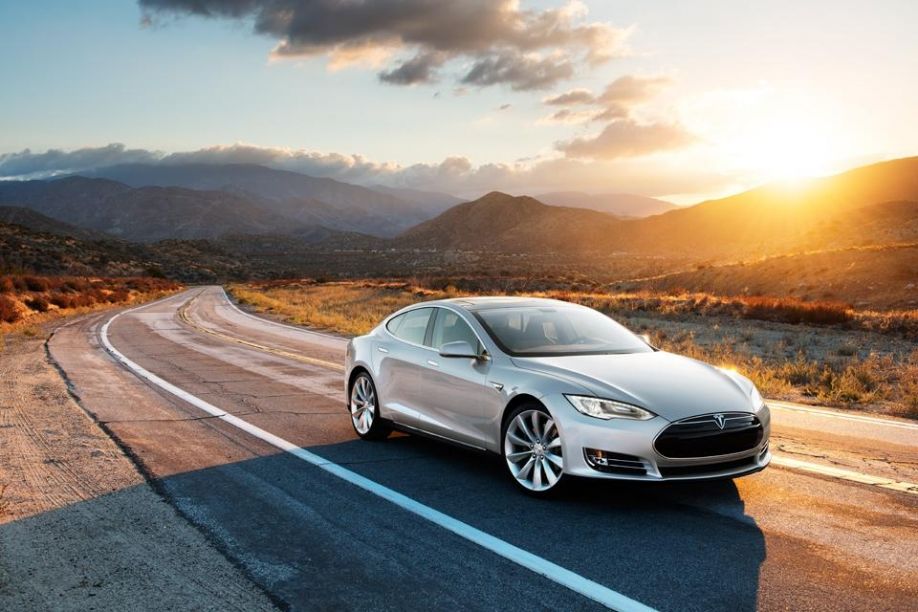 Posted by Cameron Robertson on 12/05/16, 06:26 PM
There are a lot of things that Tesla has going for it and honestly the man at the helm of the company is driving the company with his innovation and leadership skills. After the big solar roof tiles that they've released, I think a lot of people see even more potential in the company than they have ever seen!

Cirrus Link provides a modular approach to building Enterprise-Class IIOT/SCADA/MES applications delivering a superior OT solution and enabling your enterprise to connect OT data to IT services for big data analytics. CTO Arlen Nipper, co-inventor of MQTT, forged a relationship with Inductive Automation to bring our software together for the ultimate IIoT solution. The Cirrus Link modules offer complete functions such as MQTT enablement, data delivery to the cloud, electronic flow measurement, and more. These software modules transmit data from the field via MQTT, with options to launch an MQTT server in the cloud or on premise and connecting OT data to industrial and business applications. The Cirrus Link IIoT modules for Ignition empower organizations to create one streamlined pipeline for all their IIoT data.
More Products
Feature Your Product