Critics of automation claim robots are out to replace people. The near future will show that people are definitely in control and will be able to leverage technology for greater profitability and professional satisfaction. 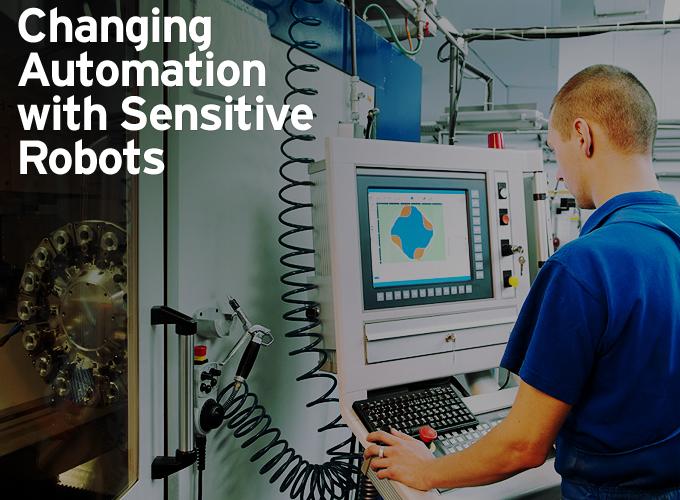 Contributed by | The Association for Advancing Automation

You point your finger at a robot across the room and it turns right and left, or up and down depending on your motions. You can order the equipment to do what you want even though you have no special programming skills. Investors backing a range of start-up companies envision a future of simplified but highly capable technology.

Operating a robot doesn’t have to be any more complicated than turning on a laptop computer or a tablet.

Merging the Best of People and Machines

Industrial robotics has grown in use because of key advantages. Machines don’t get tired, and they can repeat the same process many thousands of times per minute if necessary. Doing the same task over and over was also a reason why they were used primarily in assembly line functions in heavy industries like automotive plants.

Small and medium sized companies shied away from robotics at this level. Installing a work cell required a lot of money and installers often had to re-configure factory floors. Smaller operations had different demands that required agile solutions for less money.

People have advantages over machines like being flexible. A person carrying a box of t-shirts can be told to put down what they’re carrying, pick up an item they dropped, and grab a can of paint. That’s a simple request for a person to handle. Instantly changing directions requires intelligence that seemed impossible to program into machines. Until now.

During the next five years, look for the flexible intelligence of people to merge ever more closely with the functioning abilities of robots. This is a watershed moment for industrial automation as described in Robotics 2015 and Beyond: Collaboration, Connectivity, and Convergence. The comprehensive article on the robotics.org website refers to this a “transformative” period that will alter how we interact with robots in the workplace.

Robotics researchers and manufacturers don’t just dream up concepts and try and put them into action. They study human behavior, look at the needs in the marketplace, and find ways to improve on what people can do.

“In this business, we only do two things,” said Erik Nieves, Technology Director for Yaskawa Motoman in Miamisburg, Ohio, quoted in Robotics 2015 and Beyond. “We replicate human ability and once we’ve done that, we expand on that capability.”

Our brains fire off signals to the rest of our body depending on the information we receive and process. Manufacturers have developed open source software systems and advanced sensor technology to achieve this same result in robots. Just like the cost of storage has fallen during the digital age, companies are demanding sensor technology that costs less and has greater capabilities than in the past.

Robotics 2015 and Beyond points out that sensor technology will soon be so finely tuned that a robot can detect something as intangible as a person’s intent. This will ensure safety for people working closely with robots.

As people, we can individualize our tasks. We can sort through objects on a crowded desktop to find our keys. Robotics is moving in the same direction.Robotics 2015 and Beyond gives a detailed look at end-of-arm-tooling and how that will change the logistics industry.

Robots were once used for large items like picking up a pallet filled with t-shirts. Now, one robot with gripping capabilities can pick up diverse items that vary in size and specifications like a t-shirt, a marker, and a notebook. It will become cost-effective to automate smaller operations that can package according to the specific demands of customers.

Automation has already made a mark on agriculture, a mature industry where family farms are fading into memory. The farmer had to show up and get the milking machine ready for the herd. In Australia, models are being refined where cows are milked automatically without a farmer being present. This sense of personal freedom can serve to make farming attractive to a younger generation.

Robots need to be told what to do just like a computer can only manipulate the information it is provided. Manufacturers are working to “simplify the user experience and standardize the tools” that create and guide automated systems. The goal is to give people who don’t have technical backgrounds the ability to teach robots.

As this occurs, the use of automation will become even more widespread. Look for high levels of adoption of robotics in packaging, general metal cutting, aerospace, and general assembly operations.

Critics of automation claim robots are out to replace people. The near future will show that people are definitely in control and will be able to leverage technology for greater profitability and professional satisfaction.

Log on to A3 Automate.org to learn how advances in automation will impact your industry and your company.

The Association for Advancing Automation (A3) has launched a new website, www.a3automate.org. This blog-based website will tell the real story about companies that are successful because of automation, and how automation makes a positive impact on society.

The Association for Advancing Automation is the global advocate for the benefits of automating. A3 promotes automation technologies and ideas that transform the way business is done. A3 is the umbrella group for Robotic Industries Association (RIA), AIA - Advancing Vision + Imaging, and Motion Control Association (MCA). RIA, AIA, and MCA combined represent 750 automation manufacturers, component suppliers, system integrators, end users, research groups and consulting firms from throughout the world that drive automation forward.

Industrial control environments need to address shock, vibration, temperature, and space constraints. TE Connectivity's Industrial Mini I/O connector family is designed specifically with these needs in mind. The Mini I/O product takes the place of RJ45 connectors which were designed for office applications but wasn't originally intended for an industrial environment. The Mini I/O connectors are 25% of the size of RJ45 and are designed for the shock, vibration and temperature ranges of industrial control.
More Products
Feature Your Product