During the ten years between 2020 and 2030, were going to have our first experience with human-free businesses where systems/software will be communicating/negotiating with each other and youll just be sitting on the sideline. 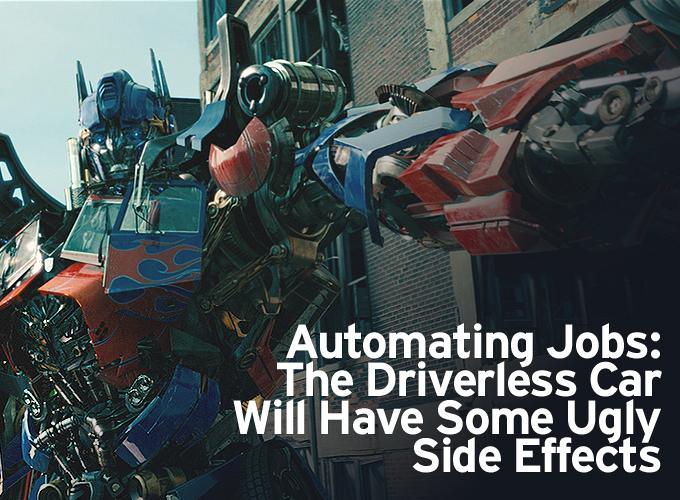 “Government knows, I mean they could hook me up with a job right here in DC. I should be working with the Autobots otherwise, it's not fair.” – Sam Witwicky, “Transformers, Dark of the Moon,” Paramount, 2011

There are a lot of signs that local and global economies are improving and CES (Consumer Electronic Show) was nothing but upbeat because it was all about cars, 4K TVs and wearables.

The holidays showed modest improvements, even though it meant manufacturers and retailers had to reduce their profit margins … dramatically.

Companies are upgrading their technologies (buying new things) to produce closer to their respective home.

Globally, people are buying cars (according to the OICA - International Organization of Motor Vehicle Manufacturers):

Auto sales growth is strong and projected to continue through at least 2018 because of the pent-up demand. Folks put off that major expense in recent years until they felt more comfortable with the economy and job prospects (average age of the car on the U.S. highways is 11.3 years).

Mobile Society – It’s not hard to believe that the U.S. has the greatest number of vehicles – cars, trucks, motorcycles – but just look around at rush hour and you’d swear all of them are on the same road as you are. With times being a “little rough,” people have also been keeping their cars for longer periods.

Obviously, the industry would like to see automobiles used as widely as smartphones – almost one per person – but there are reasons that won’t happen:

The automotive industry spends a lot of time and money monitoring consumer habits, desires; and increasingly, the availability of technology that will enhance/improve the performance, reliability, safety and overall user enjoyment of their cars.

Their design and business “to do” list is fairly extensive, even before they get to the driverless (autonomous) car you thought was neat at the show.

Good Year, Prospects – The automotive industry enjoyed reasonable growth in 2013 and is forecasting more sales in the next three years by focusing design and production in key locations closer to the target market. In addition, they are investing heavily in technology that will be used in autos introduced in 2020 – 2030.

There’s a lot of design, development, integration and infrastructure work that has to be done.

During the recession, the industry – and all industries – looked for ways to cut expenses, boost efficiency.

Some like to say that jobs have been lost to overseas competitors, offshoring work/programs replacing workers with automation.

More Automation – The vehicle manufacturing industry shows the same signs of automating manufacturing, using robotics to replace production line workers. Over the life of the production systems, they cost less, can be retooled for new tasks quickly and don’t need rest. While production is growing worldwide, it is being achieved with computerized machines.

The funny thing about that “offshoring is about cheap labor” story is … it’s a myth!

Actually, management has gotten better at looking at the total cost, rather than an arbitrary front-end cost. They’ve finally dug a little deeper looking at total landed cost (also known as TCO – total cost of ownership).

They’re no longer blinded by the initial cost of parts/components and have started considering all of those intangibles like … lead time, ability to switch tactics quickly, time eaten up in communicating/recommunicating, risk management/monitoring, etc.

Nearshoring, Reshoring – System and equipment manufacturers have found that moving production and assembly produced only minimal savings and that timing/logistics frequently wiped out any savings. As a result, vehicle and other manufacturers are locating facilities and their suppliers closer to the target markets. Being closer to prospective customers saves time, money and work.

It sorta’ took the air outta’ that balloon.

Then there’s the fact that governments have ways of leveling the field even more by levying tariffs on products sold in the country (any country) by saying how much of the product must actually be produced locally to avoid penalty charges.

Auto makers (and the rest of the profitable/struggling businesses) solve that by shifting production facilities to new regions driven not just by cost but demand.

As Dylan noted, “Do business with the side that's gonna win.”

So it’s not just a Detroit and Japan industry … it’s global.

Manufacturing Clusters – Vehicle production is no longer centralized in a few countries. Instead, facilities are located in areas closer to potential consumers as well as where power and labor costs are low.

The shift in emphasis involves offshoring, nearshoring, reshoring so they are closer to their regional markets but with highly automated plants that require fewer but more highly skilled employees.

The bigger the manufacturer, the more they like to:

That’s probably why automotive industry trackers say that since 1999, more than 20 of the largest global auto parts folks have filed for bankruptcy.

They depend on the final product producer and any shift in demand really hurts them.

Then too, there are always the competitors who know the business is caked with profits so they’ll lose a little on each part but make it up in volume.

The same stinkin’ thinkin’ exists in every industry.

Whether the plant/company is in France, Japan, Brazil, Canada, the U.S., you name it; the best way to control costs/maintain quality is to automate, leverage technology.

But when the plants come back, they just don’t need as many people.

Depending upon your country and industry, unemployment is at 10-20+ percent.

Most economists aren’t optimistic that this will change, even as companies bring their production home because this industrial revolution won’t produce more work for folks so they can make more money, buy more things.

What we’re staring at on the horizon is automation, robots and smart machines taking over more and more of the routine jobs and then slowly moving up the educated work food chain.

Those hired will also need greater technical skills to keep Rosie the Riveter running because she’s taking over the low-pay, low-skills jobs.

What happens to the job market when robots/systems self learn?

Think about that car that will drive you – somewhere for some reason – because it will have to draw from a steadily increasing Big Data database to find the most efficient/fastest route,  pick you up and deliver you with the greatest protection possible and obviously entertain you along the way.

The autonomous vehicle (truck or car) won’t be seriously appearing on the road until at least 2020; but in between now and then, we will see a lot of automation.

By 2030, a large percentage of the vehicles on the road will be connected - wireless networks, diagnostic systems, accident prevention.

During the ten years between 2020 and 2030, we’re going to have our first experience with human-free businesses where systems/software will be communicating/negotiating with each other and you’ll just be sitting on the sideline.

Automation and smart machines are going to dramatically change and impact employment.

Of course, the increased automation in blue and white collar jobs also means countries; industries and companies will also have to do a seismic shift as to how job training and jobless reality are addressed.

That’s something we’re all going to have to address sooner or later.

Technology will impact the human workforce which by implication (under today’s way of work/pay relationship) means who in the heck is going to buy the stuff the automated factories – including new car manufacturers – produce?

Rosie – Robotics and manufacturing automation are being widely used by companies to compete with foreign rivals. In addition, firms in many parts of the world will increase/expand production with robotics--especially in uncertain times because laws in the countries make it difficult and expensive to downsize staffs.

Until then, I’ll see if I can help Sam Witwicky who declared, “I'll take my orders from the Autobots. I know them. I don't know you.”