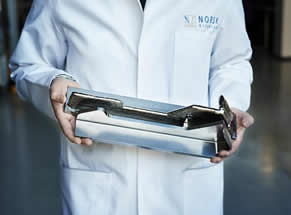 Lucas Mearian for ComputerWorld:  Boeing will begin using at least four 3D-printed titanium parts to construct its 787 Dreamliner aircraft and may some day rely on as many as 1,000 parts created via  additive manufacturing.

Boeing has hired Oslo, Norway-based Norsk Titanium AS to print the parts. It marks the first time that FAA-approved, 3D-printed titanium parts will be used as structural components on a commercial aircraft, according to the company.

The parts will be used near the rear of the Dreamliner, a mid-sized, wide-body, twin-engine jet airliner. Boeing builds about 144 Dreamliners each year.  Full Article: