This 3D printer can rival standard manufacturing on the factory floor 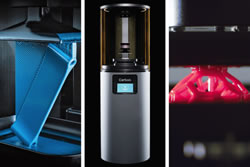 Lucas Mearian for ComputerWorld:  Start-up Carbon began shipping its industrial-grade 3D printer with the expectation that big-name companies will soon be using it to replace traditional forms of manufacturing.

Last year, the Silicon Valley company emerged from quiet mode to announce its technology: a machine that can create objects 25 to 100 times faster than other 3D printers.

Carbon is not selling its M1 3D printer outright, but instead is offering it through a subscription price of $40,000 per year, which includes a service and maintenance plan.