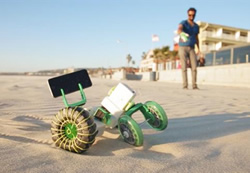 Benedict for 3Ders.org:  Tech startup ZeroUI, based in San Jose, California, has launched an Indiegogo campaign for Ziro, the “world’s first hand-controlled robotics kit”. The modular kit has been designed to bring 3D printed creations to life, and has already surpassed its $30,000 campaign goal.
It would be fair to say that the phenomenon of gesture recognition, throughout the wide variety of consumer electronics to which it has been introduced, has been a mixed success. The huge popularity of the Nintendo Wii showed that—for the right product—users were happy to use their hands and bodies as controllers, but for every Wii, there are a million useless webcam or smartphone functions, lying dormant, unused, and destined for the technology recycle bin.  Full Article: