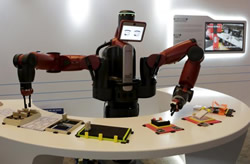 BY GERRY SHIH for Reuters:  In a cavernous showroom on the outskirts of this port city in northeastern China, softly whirring lathes and svelte robot arms represent Dalian Machine Tools Group's (DMTG) vision of an automated future for Chinese manufacturing.

On closer inspection, however, most of the machines' control panels bear the logos of Japan's FANUC Corp or the German conglomerate Siemens.

The imported control systems in DMTG's products – used in the assembly of everything from smartphones to cement trucks – are symbolic of the technology gap between Chinese and foreign industrial automation firms, just one of several challenges facing China's ambition to nurture a national robotics industry.

"Last year everybody thought they could produce a robot," said Alan Lee, director of Asia sales and business development at Boston-based Rethink Robotics. "When you have market saturation you'll have filtering and M&A. These guys will be the first layer to suffer."

It is a storyline familiar from other new industries such as solar panels: Beijing's policies and subsides trigger a wave of low-margin, low-cost contenders to rush into the market, where, with no meaningful technology of their own, they struggle to compete on price alone.  Cont'd...