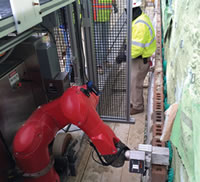 Vicki Speed for Inside Unmanned Systems:  It would seem that robotic systems could provide an extra measure of safety, as well as a higher level of efficiency and machine-consistent quality. Yet, to date, the use of robotic systems on construction jobsites has been minimal.  The building industry, however, is looking with fresh eyes at robots—including at least three new systems expected to be available this year—with a focus on near-term efficiencies that make investment in the systems make sense.
Demolition Days
Among the first fully-realized applications of robots in the construction environment are those used to support work that comes at the end of a structure’s life, namely demolition. In fact, remotely operated demolition robots have been around for more than a decade.
Robotic Building Blocks
The short answer is, ‘Yes.’ There are robotic systems in development around the world that can lay bricks, set tile or finish concrete floors.
Bionic Builders?
While not autonomous systems, robotic exoskeletons, those high-tech wearable suits seen in futuristic movies that help mere mortals defend Earth against other beings, could be a very real part of tomorrow’s jobsite and a possible precursor to autonomous robots in the field.
More Additive & 3D Printing Stories | Articles | News