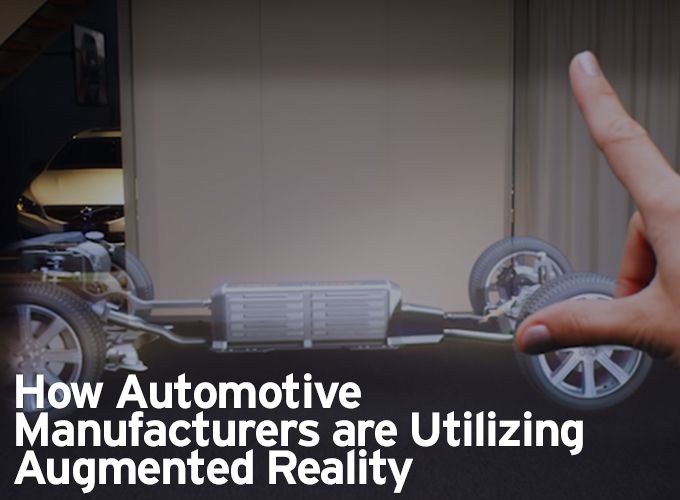 Just as the automotive industry was among the first manufacturers to adopt automated production lines, newer cutting-edge technologies such as augmented reality (AR) and artificial intelligence (AI) are being implemented in factories across the globe to bring us vehicles that are more quickly and cheaply designed as well as more safe, economical, and easy to use.

The Difference Between Mixed, Augmented and Virtual Reality

Augmented and virtual reality technologies are still in their early days of introduction to the world. Developers of hardware and software are still grappling with issues around wearability of devices and availability for mass consumer adoption. These issues and the newness of the technology can sometimes cause a little confusion over terminology.

The easiest way to understand the differences between ‘reality tech’ is to think of it in terms of a spectrum. Actual reality sits at one end and a complete digital simulation at the other (virtual reality). AR sits somewhere inbetween. Both software and hardware dictate how much of the ‘real’ world we see and how much of a digital layer is viewed. AR aims to integrate digital information with the user’s real-time environment. For the automotive industry, this technology could be instrumental in future advancements.

Uses of AR in Automotive Production

Although the public may not be entirely ready for AR technology, manufacturers are eager to put it to use because of the benefits it contributes to production. There are several areas in which AR is expected to be used more widely for manufacturing and selling vehicles. From design through to production and sales, AR can be used to great effect.

Complex Production – Putting together a car is a complicated process involving the assembly of thousands of components. Despite the advancement of automated production lines, humans are still a major contributor to bringing all the parts together to produce the vehicles we see on our roads. Volvo is utilizing Microsoft’s HoloLens to enable production line workers to digitally view assembly instructions in real-time while working to put together parts of the vehicle. Work instructions, associated technical drawings and even videos from the last person who completed the procedure can be viewed in the AR glasses. This allows workers to keep their hands on their task with virtual guidance, negating the need to walk over to a work station to check anything and increasing outputs.

Maintenance – Similar to complex production, AR glasses have been developed by Mitsubishi so maintenance workers always have the correct manual in hand when carrying out routine maintenance of manufacturing equipment.  Users even have the ability to enter inspection results with their voice. This enhances safety and efficiency of maintenance work.

Design and prototyping – After a successful pilot stage, Ford is utilizing AR technology to create 3D models without having to build every single design prototype with clay. Their use of HoloLens to let designers quickly model changes to cars, trucks, and SUVs is a more inventive example of how this technology can be used. It allows designers to see their changes on top of an existing physical vehicle, enabling them to quickly recognize issues with designs before a more labor-intensive prototype is ordered.

How AR factors in with automation

With the focus of AR being to allow humans to interact more in the assembly process with the assistance of technology, one may wonder how this falls in line with the advancements in automation of production and machine learning. In a way, the two are competing with one another, but this may not be a bad thing.

Automated technologies are growing more intelligent and efficient, providing countless benefits to manufacturing. Many have viewed this as threatening and believed robots were taking away our jobs. With the implementation of AR, humans can collaborate with technologies and increase their own efficiency by utilizing the Internet of Things to have more information on hand as intelligent machines do. This leverages humans’ positions in the workspace as they can utilize the IoT in the way robots do but have more personal experiences with the manufacturing processes which robots may not. While it may seem as if the two are competing with one another for the best way to tackle manufacturing, AR and automation may be mutually beneficial in increasing production.

Clearly there are already multiple areas where AR can streamline production processes, reduce costs and increase turn-around times. While many are excited about the inclusion of AR technologies for consumers, the application of AR in production is only in infancy– enhanced collaboration, visualizing company data and production information, as well as more hands on uses as detailed above, are set to change the way vehicles and other products are produced in the very near future .

Posted by David Jones on 08/21/18, 06:22 AM
The existing solutions to the augmented reality already cover many areas: tools for automating processes and increasing productivity, training employees, reducing product defects, increasing the efficiency of logistics processes, and ensuring labor safety.How it works and more details about augmented reality in manufacturing - https://bit.ly/2ORbYd6