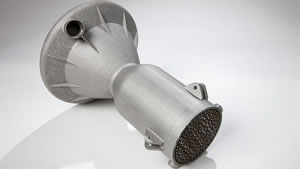 Robert F. Service for ScienceMag:  3D printing has taken the world by storm, but it currently works best with plastic and porous steel—materials too weak for hard-core applications. Now, researchers have come up with a way to 3D print tough and flexible stainless steel, an advance that could lead to faster and cheaper ways to make everything from rocket engines to parts for nuclear reactors and oil rigs.

Stainless steel was first invented nearly 150 years ago, and it remains widely popular today. It’s made by melting conventional steel—itself a combination of iron and carbon (and sometimes other metals like nickel)—and adding in chromium and molybdenum, which prevent rust and corrosion. A complex series of cooling, reheating, and rolling steps gives the material a microscopic structure with tightly packed alloy grains and thin boundaries between the grains that create a cell-like structure. When the metal is bent or stressed, planes of atoms in the grains slide past one another, sometimes causing crystalline defects to connect with each other—producing fractures. But strong boundaries can halt these defects, making the material tough, yet still flexible enough to be formed into a desired shape.

3D printing researchers have long tried to reproduce this structure. Their setup starts with a powdery layer of metal alloy particles laid on a flat surface. A computer-controlled, high-powered laser beam then advances back and forth across the surface. Particles hit by the laser melt and fuse together. The surface then drops down a step, another layer of powder is added, and the laser heating process repeats, binding the newly melted material to the layer below. By repeating this tier-by-tier addition, engineers can build complex shapes, such as rocket engines.  Full Article: