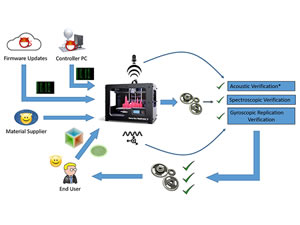 Charles Q. Choi for IEEE Spectrum:  3D printers will become attractive targets for cyberattacks because 3D-printed objects and parts are finding more and more use in critical infrastructures around the world, such as in healthcare, transportation, robotics, aviation, and space, researchers say.

In response to the threat, a trio of techniques to monitor 3D printers for cyberattacks is revealed in a new study from researchers at Rutgers University and the Georgia Institute of Technology.

3D-printing is increasingly playing a part in situations where lives may be at stake, medical prostheses or car parts, for example. However, there is currently no standard way to verify that the 3D-printed parts were made accurately, the researchers say.

“3D printing will be used for manufacturing almost everything: artificial organs, homes, buildings, and even aircraft parts,” says study co-author Mehdi Javanmard, an electrical engineer at Rutgers University in New Jersey. “With wireless connectivity of controllers, unknown and undetectable cyber-physical attacks can result in devastating effects without any way to trace the attacks.”  Full Article: