Amazon robots bring a brave new world to the warehouse 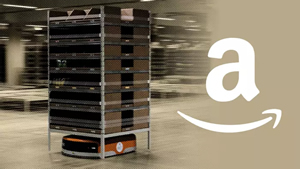 Michael Pooler for FT.com:  An industrial dance takes place every day and night on the floor of Amazon’s huge warehouse in Manchester. Tall upright shelves waltz in and out of each other’s paths and around stationary storage units, weaving backwards, forwards or sideways without touching. Performing the graceful movements is an unassuming troupe: squat orange machines on wheels and just 16 inches tall, which slot underneath and carry their loads in a geometric choreography. The only humans in sight are around a caged perimeter surrounding the robots, where the storage units arrive for goods to be picked by staff through gaps in the fence, according to instructions from computer screens. “Up until now . . . we’ve had these long aisles people walk up and down to find an item, pick it off a shelf and scan it, put it in a tote or on a cart to go somewhere,” says Roy Perticucci, vice-president of Europe customer fulfilment at Amazon. “Now we have the shelves moving to the picker and that makes a huge difference. I would say [it’s] arguably the start of an assembly line working in logistics.”  Full Article: