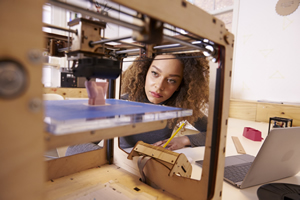 JP Buntinx for The Merkle:  It may not make much sense for most people to print 3D objects on a belt, but the advantages become clear when explained a little further. This device prints objects on top of a moving “treadmill” belt, which allows for the creation of objects which were previously unthinkable. It is good to see some alternatives to the traditional top-down 3D printing, as it limits objects in size to the parameters of the printer itself.

The Printrbelt prints objects on the belt and then moves down the Z axis to get the object onto the surface below. It works identically to industrial conveyor belts, but adds the flexible object creation of 3D printing. This method offers advantages compared to traditional 3D printing. Having more of angles to work with will yield more interesting creations, as well as more structurally-sound objects.

Unfortunately, this belt printer will not come cheap. A lot of consumers will be disappointed to hear it will cost around $1,700, although prices will plummet in the months following the initial release. However, for anyone who takes 3D printing seriously and wants to create multiple objects in quick succession, this belt printer may still be worth the hefty price tag. It is possible to print larger objects than the average 3D printer can handle.

The company’s current plan to keep up with demand is to build them based on orders coming in. During the initial stage, it may take two to three weeks to build and ship units. Eventually, that delay will be brought down to shipping the printer the very next day, if possible. It all depends on how much demand there is for this project, which is will remain uncertain until launch.

This project goes to show there is plenty of innovative ideas in 3D printing. Although these devices have been available to consumers for some time, 3D printing remains a bit of a niche market. Giving consumers an option to print multiple small objects or one larger object at a time by using the same PLA material may change the game. There will always be people who have a use for a belt printer, even if the initial demand may not be so impressive.  Full Article: