A peek into Samsung's smart manufacturing 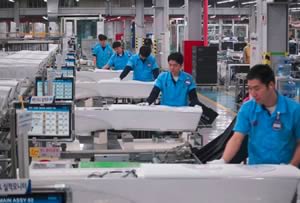 The Investor:  Stepping inside one of Samsung Electronics' plants for air conditioners and air purifiers in Gwangju, visitors can see the usual scene of workers fixing parts with automatic screwdrivers and other handheld devices along assembly lines.
There is, however, something different about these facilities where Samsung churns out its signature Wind-Free Air Conditioner.
Compared to traditional assembly lines where each worker does only one repetitive task, such as fastening bolts and nuts, workers at these assembly lines work more like “craftsmen.”
They do multiple tasks, including monitoring quality control systems and assembling not just one, but different components before the finished products roll off the lines.
Samsung calls this process with skilled assemblers a “module production system.”
Together with a fully automated system featured in the early production stage, the process has helped improve the production capacity of air conditioners by 25 percent, Samsung said.
“An MPS in which each worker/expert takes charge of nearly the entire assembly process has been adopted for the first time in the electronics industry,” Choi Choong-sik, a Samsung official from one of the firm’s three manufacturing complexes in Gwangju, told a group of visiting reporters.
The official explained that MPS and the automated system have played a key role in lowering the rate of defective products by 50 percent.
“Previously, if one worker made a mistake while tightening bolts at a line, for example, all the products on the same line had to be retrieved and checked to fix the defect, but there is no chance for such thing occurring now.”  Full Article: